PARIS — April 5, 2016 — Viaccess-Orca , a global leader in the protection and enhancement of content services, and the French TV channel TF1, announced today the broadcast of the world’s first live stream of a football match in 360 degrees in Ultra HD (HEVC-encoded), showcasing for a test audience a premium television experience with virtual reality technologies. This private audience enjoyed a football match between France and Russia, in real time, from three remote locations using virtual reality (VR) headsets on Tuesday, March 29. The live broadcast was recorded and will be shown for the first time as part of Viaccess-Orca’s “Virtual Arena” demo at the 2016 NAB Show April 18-21. 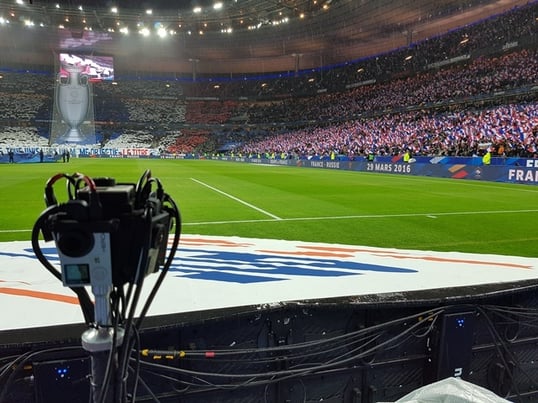 “Viaccess-Orca and TF1 are ushering in a new era for sports entertainment. At the event, our audience experienced an actual stadium ambiance, feeling immersed in the game. This was made possible by our best-of-breed, end-to-end solution for streaming of 360ᵒ video. Pre-integrated with an ecosystem of technology partners and compatible with existing industry standards”, Viaccess-Orca’s “Virtual Arena” offers a premium 360ᵒ television experience, including for the emerging VR environment”, said Alain Nochimowski, Executive Vice President of Innovation at Viaccess-Orca. “We are thrilled that together with TF1 and our technology partners, we are shaping the future of television and paving the way to the ultimate immersion quality, and viewers’ engagement.”

The unique experience was powered by an end-to-end ecosystem of technology partners managed by Viaccess-Orca and including, leading and innovating video compression and delivery company Harmonic, over-the-top streaming specialist Keepixo, 360 degree stitching and image processing specialist VideoStitch, expert in production process for live programmes AmpVisual TV and, in filming and post-production of 360° videos Digital Immersion.

The VR ecosystem offered by Viaccess-Orca and its partners is pre-integrated, which allows content owners and broadcasters, such as TF1, to quickly deploy a fully immersive television experience.

Olivier Abecassis, Chief Digital Officer TF1 Group comments: “At TF1, we work every day to prepare the future of TV and develop new immersive experiences to our audience. This is the reason why we are very happy to be the first TV channel to experiment the live stream of a football match in 360 degrees in Ultra HD with our partner Viaccess-Orca”.

The “Virtual Arena” demonstration will be available for the first time for the NAB Show attendees at the Harmonic booth SU1210, April 18-21, 2016.

For more information on Viaccess-Orca and the company’s products, visit https://www.viaccess-orca.com.

TF1 is an integrated media group with a mission to inform and entertain. As well as broadcasting TF1, France’s most popular television channel, the TF1 group offers a range of content and services to suit all media and devices. TF1 is France’s leading private-sector broadcasting group, with five channels (TF1, LCI, TMC, NT1, HD1) and an innovative digital offering via MYTF1. The Group also broadcasts targeted special-interest channels (TV Breizh, Histoire, Ushuaïa and Serieclub) on pay-TV. Additionally, the TF1 group has interests in the production and distribution of content relating to its in-house channels. Through the acquisition of a majority interest in Newen Studios, the Group is aiming to accelerate international expansion of its production and distribution. Finally, the Group has built up a broad range of complementary businesses in areas such as home shopping, , board and card games, production and live shows. For more information, go to www.groupe-TF1.fr @GroupeTF1

As a leading global provider of content protection, delivery, and discovery solutions, Viaccess-Orca is shaping the ultimate content experience. Through its integrated range of business-savvy products and solutions, Viaccess-Orca helps service providers in the cable, DTT, satellite, IPTV, and OTT industries gain a competitive edge in today’s rapidly evolving multiscreen environment. By enabling service providers to securely deliver an engaging user experience on any device, Viaccess-Orca is reinventing the entertainment landscape. Viaccess-Orca is part of the Orange Group. For more information, visit www.viaccess-orca.com or follow the company on Twitter @ViaccessOrca and Linkedin.