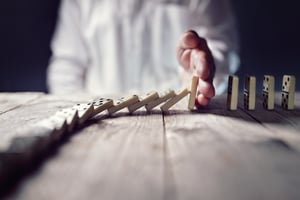 TV & movie piracy losses were up to $52bn was the success story of modern anti-piracy measures. It could have been much worse.

The figures from Digital TV Research’s latest Online TV Piracy Forecasts report. It paints an alarming picture of the scope and scale of modern content piracy. Some of the main points to note are:

Certainly the trend seems extremely alarming on the first look. Between 2010 and 2016, the recorded figures have worldwide piracy losses jumping from $6.7 billion to $26.7 billion. And it’s over the next six years that that figure is projected to jump again to $51.6 billion. The US alone will account for $11.6 billion of that amount.

Meanwhile, hidden in the mass of data in the report is the fact that eight countries will record revenue losses of over $1 billion each, double the number for 2016.

It is though, not all doom and gloom.

When it comes to looking behind the $52 billion headlines, an interesting picture emerges.

For a start, there is a definite deceleration when you look at the global figures, as you can see illustrated below. 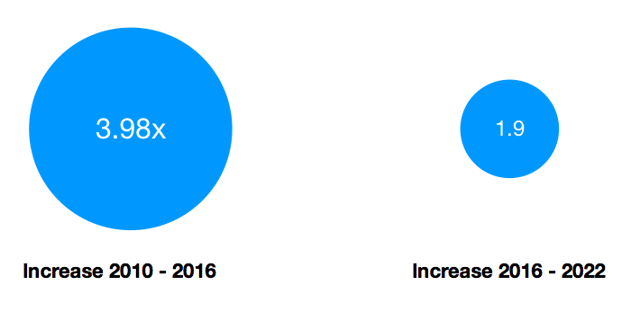 This is, of course, not an even picture across the world, with some countries slowing down while others experience extreme growth in piracy losses. 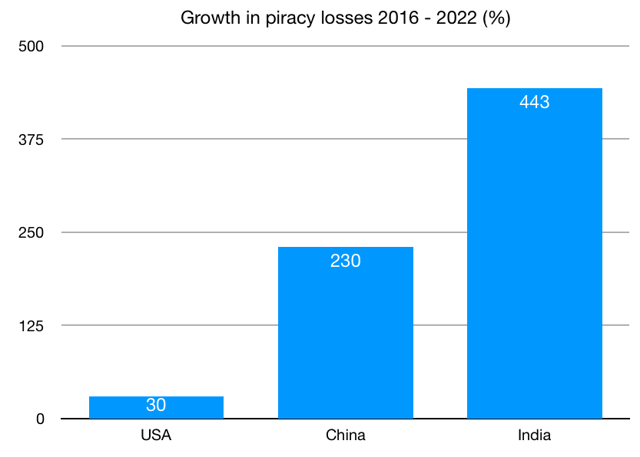 The important point to be made here is that the growth is slowest in the country with the worst problem. The growth in India’s revenue losses up to 2022 is alarming, but is ‘only’ forecast to take its total up to $3.1 billion compared to the (world-leading) US figure of $11.6 billion. The fact that the brakes are on to such an extent in the USA is proof that the range of anti-piracy protection measures deployed to protect content in the country are working.

And while China, as it often is, can seem like an outlier with its large losses of $9.8 billion by 2022 and exhibiting impressive growth to get there, there is one further element to the report’s full figures that is worth considering.

As Digital TV Research’s data below shows, while revenue losses to piracy are increasing, so too are the revenues from legitimate sources as more and more operators launch their own OTT services. 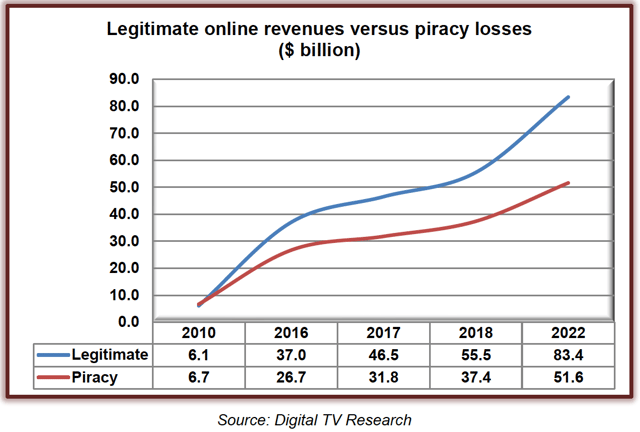 Indeed, the analyst says the switch over point when revenue overtook loss was as far back as 2013 and, since then, the gap between the two measures has only widened.

Taking China’s figures as an example, the gap between the two measures will improve from a deficit of $1.2 billion last year to a surplus of $2.4 billion in 2022. And the gap is widening. Piracy losses might represent 68% of OTT revenues this year, but by 2022 that figure will be down to 62%.

It’s not a huge shrinkage but it is still a case for optimism and a sign that anti-piracy measures are gaining traction. The hope will be that the same slowdown pattern witnessed in the USA can be replicated in other territories and that there comes a tipping point some point in the next decade where the legitimate alternatives are plentiful enough and pegged at an attractive enough price for growth to decelerate elsewhere too.

The one corollary is this: Covering 138 countries, the Digital TV Research forecasts include revenues lost only by TV episodes and movies and don’t include other sectors such as sports. The overall figures will be higher. And in the same way that vaccine programs can provide herd immunity against disease for whole populations, so the more operators that take anti-piracy measures as a matter of deadly seriousness, the better.