The APAC region is becoming a key battleground for OTT Platform Providers as they take advantage of improving infrastructure, with localized content an important differentiator for both global and local players. 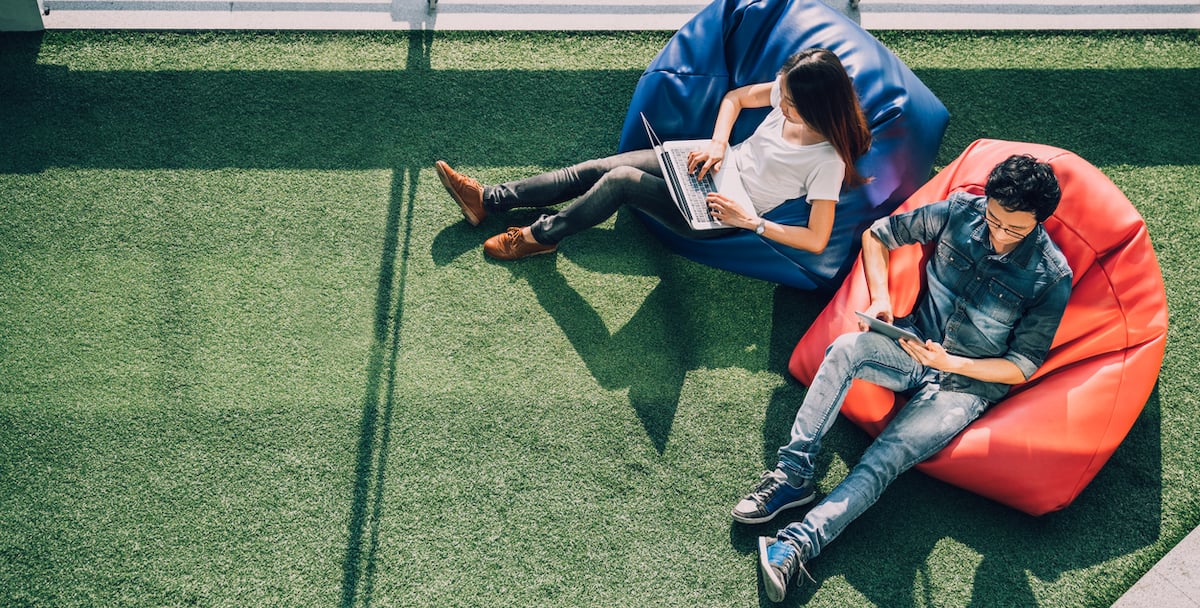 Few regions of the world have shown so much consistent growth in so many industries as APAC. Even if you take the economic powerhouse of China out of the equation, there is a constant increase in almost all metrics across the board as the region’s diverse economies continue to heat up. And the broadcast industry is no exception.

APAC is a large and diverse region, with notable differences between the many countries. Notable differences also exist within individual countries, especially between rural and urban populations and the infrastructure that serves them. Yet in survey after survey and report after report, the common denominator is of growth. From the vast economies of China and India, through the fragmented SE Asian market, to the developed and mature markets of Japan, Korea and Singapore and on to ANZ, more consumers are demanding more video.

According to analysis from Media Partners Asia (MPA), the Asia Pacific online video sector will double in size by 2024. The region’s online video advertising and subscription revenue will expand from $26 billion in 2019 to $52 billion in 2024, an annual growth rate of 15%. So, what is driving this expansion? And how do operators ensure they are a part of it?

Identifying the different reasons for the growth across the region is not an easy task due to the sheer diversity exhibited. Nevertheless, the interlocking three factors of an improving digital infrastructure, an increase in paid for local services, (either SVOD or Pay-TV), and the fact that the big international services such as Netflix are also increasing their attempts at localization are all at play to varying degrees.

Let’s look at two of these in detail.

The infrastructure picture is, of course not consistent across the region, with some countries such as South Korea far ahead of the global curve, and several others lagging behind. Ironically, one of the factors driving OTT uptake has been the slow pace of infrastructure investment in rolling out Digital Terrestrial Television across the region. Ovum estimates that a 59% digital TV penetration at the end of 2014 will increase to 88% by the end of 2020, a transition that the IABM characterizes as ‘alarmingly low’, while at the same time admitting that both MENA and LATAM are at similar points.

“The lack of DTT progress can hinder the ability of traditional broadcasters, especially public broadcasters, to compete effectively in current media markets,” the IABM continues. With the linked issue of a transition to HD also taking place at the same time, the assumption is that consumers are being driven towards OTT services as they offer a wider range of content functionality, and superior picture quality.

As we’ve highlighted in LATAM, there is a direct link between broadband provision and OTT demand, with operators often using OTT solutions as differentiators when they launch into increasingly crowded markets. The Netflix ISP Speed Index for April 2019 highlights the uneven nature of the provision, however; the Philippines has the lowest average connection speed at 2.57Mbps, while Hong Kong leads the field of countries with 4.08Mbps. By way of comparison, the company lists the USA at 4.19Mbps.

The Netflix figures are, of course, merely a measure of prime time Netflix performance on particular ISPs, and not a measure of overall performance for other services/data that may travel across any specific ISP network. So, while of limited use in general, in the context of delivering video to consumers they are very important. And it is worth pointing out that Netflix recommends 5.0Mbps as a minimum for HD streaming.

Unsurprisingly, a lot of the focus in the region — and especially given its geographic spread and the difficulties of laying physical cable — is currently on mobile broadband. Indeed, in many countries, mobile has overtaken fixed broadband as the primary means of internet access. This is only going to accelerate as 5G deployment starts to ramp up.

This mobile first approach has implications for operators, who need to ensure their OTT offerings are tailored as such. This is not only in terms of content and UI either, but also when it comes to payment models, which tend to be undeveloped in many countries. As a result we are seeing a lot of partnering between OTT providers and existing telecom and Pay-TV operators, who have already carved out models that work well in low income markets with poor credit penetration. Indeed, Netflix is trialling a low-cost, mobile-only subscription plan in India that brings its historically high and globally set price more in line with the local market.

The importance of local content can be seen by the importance that the global players place on it. Netflix was present in the APAC region a year before its global launch in January 2016, establishing bridgeheads in ANZ and Japan. As the IABM’s latest Media Technology Demand Drivers report for the region points out, usually Netflix offers around 20% of local programming, either made specifically or licensed. When it launched in Japan it pushed this figure up to 40%, plus entered a deal with telco and internet giant SoftBank to offer its customers easy ways to pay for a subscription. The IABM says that “Netflix has replicated this strategy across the whole region by entering agreements with local companies producing local content.”

For insights into SVOD, global opportunities and piracy, click here to view our infographic.

This though is not a new strategy. Netflix has been increasingly internationalizing for nearly two years. Ampere Analysis says that 30% of Netflix Originals were non-English language in mid-2017. By the time we got to Q4 2018, the company was producing new content in 25 countries, with 133 titles originating outside of North America and 36% of its originals were non-English. APAC’s contribution, primarily from India and Japan, is illustrated below. 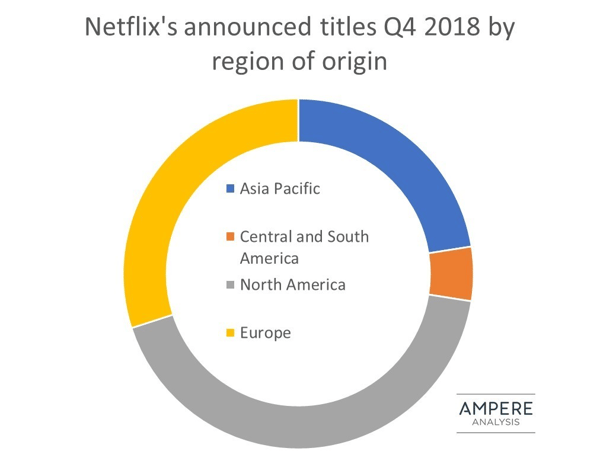 Amazon Prime Video has also been aggressive in this field, with 70% of its content in India and Japan local. It has also launched its streaming service free to Prime customers.

Given that governments are starting to legislate to ensure local content on streaming services (the European Union specifies 30%, Mexico is seriously considering it) and given the advantage that local content has to local audiences, we expect to see more local production ramp up in APAC and other areas. For local operators, some of whom may already have extensive locally produced content libraries, the importance of local content represents a significant opportunity to engage viewers with new OTT offerings. They may not be able to outgun Netflix when it comes to sheer numbers of subscribers, but the comparative success of operators such as iflix in Malaysia, which is aiming to quadruple its commissioning slate by 2019, HOOQ, and Viu already shows that there is definitely room in the market.

There are of course, plenty of challenges in the region too. Piracy in APAC is something we’ve written about many times before, with headline figures such as the fact that up to 45% of consumers in Thailand are using a TV box which can be used to stream pirated television and illegal content. Nevertheless, the industry is fighting back, and initiatives such as our new Anti-Piracy Center are providing valuable tools in the battle to protect content.

As a recent S&P Global Market Intelligence report points out, there is also probably too great an emphasis on AVOD at the moment throughout APAC, which detracts from any future SVOD growth. AVOD remains an important component of OTT growth overall, especially given its role in raising awareness of the services available and encouraging viewers to seek legal sources for premium content.

It is also worth pointing out that the rate of growth is starting to slow too as the market matures. This is going to mean operators will have to be rigorous in the planning and execution of their services (see our recent blog post 6 OTT Challenges & Pitfalls - and How to Avoid Them for advice in that area). But, while growth might be slowing, revenues will still be on the rise for the next forecast period and, hopefully, beyond. 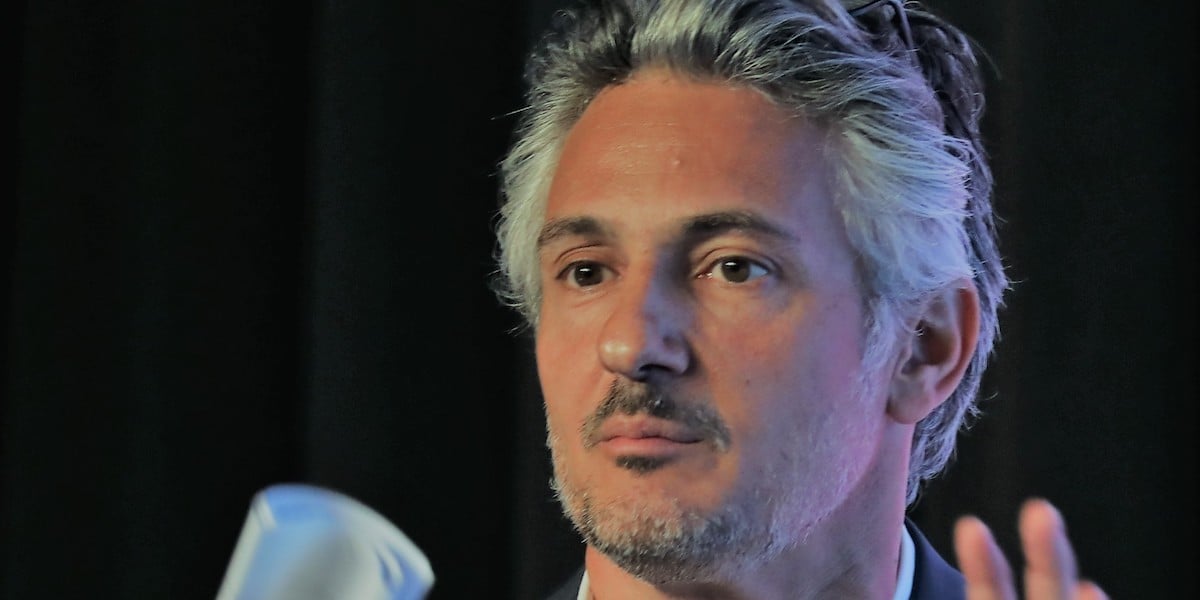 Keep Updated
Want to get new blogs directly to your inbox?