The Question Operators Large and Small are Asking: To Be or Not OTT? 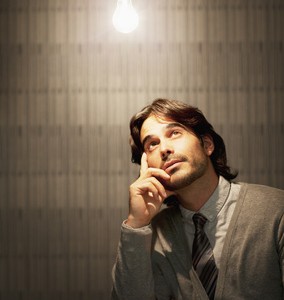 A few months ago, a first year Broadcast Technologies student interviewed me for his end-of-year paper. His candid questions about our industry reminded me of the contrast between how clearly I now understand some aspects of our industry and how very unclear others still are for me.

Things, which now appear with crystal clarity, include how regulation and competitive pressures have created a real gap in broadband speeds where 100MBPS is becoming common in some countries whilst for others 2MBPS is still considered good. Why IPTV is still growing around the world, despite its complexity, un-reliability and unclear ROI, is also really obvious to me now, ten years on: Telcos simply had no choice.

Those certainties based on 10 years of looking back give some ideas of what’s coming in the next 10 … well … mmm … months.

So when my young student asked me what kind of technologies he himself might be working on, over a decade from now, I had to take evasive action.

He asked me which stakeholders would most likely shape the future and went on to list the Telcos, DTH operators and Broadcasters. I mumbled some answer or another hesitantly. But right after the call it came to me: of course, probably none of them would be there at all, at least not in that same industry. Big companies run themselves out of existence as regularly as clockwork as long as you take a long enough view and my young friend wanted answers in decades, not years let alone the months we usually live in. It’s usually a case of losing focus of the purpose fulfilled for end-customers. Examples abound, like the railroad companies that thought they were about delivering a train service instead of transporting people, so they never moved to buses or planes.

It’s harder to decipher what’s happening to much of the printed media as online is becoming more and more prevalent but something similar is at work here.

Concerning different media, I was reconciled with the concept of storytelling and transmedia by a brilliant presentation at this year’s EuroITV conference in Berlin by Janet Murray. I’d considered such subjects to be woolly, esoteric and frankly, just an excuse to party. But her one-hour keynote made all the pieces click-in together, to the extent that I’d now encourage young people to move into that field. Anyway, one of her numerous examples was that whether you're a print-newspaper in distress or a TV station on a downhill slope, the iPad app you should be building today is probably the same one.

Janet made it even seem fun too. The glass isn’t half-empty and it shouldn’t be about survival for these companies. It’s half-full: IP and the Internet are more than just technology accelerators. They have radically changed the value people perceive in many things like for example a newspaper.

In the nineties, I was happy to pay a few French Francs a day for my morning or evening paper, sometimes both. By the end of some months I might well have spent the equivalent of 50 Euros. I currently enjoy the free phone apps of both Liberation and Le Monde here in France, but still baulk at the 15 or so Euros per month they want me to pay for the full versions. That’s more than twice as cheap as I used to pay and I’d get at least twice as much value, however it still “feels” too expensive.

This is a typical example of the OTT business model trap: there may be a market as well a product that fits snugly into it, but nobody has yet figured out how to make that happen. The TV set makers with their messy connected TV jungle seem further to solving this conundrum than ever they were. I used to think Android would come and save their day, but that white knight is sure taking his time The way forward that NetFlix is showing has become too expensive for most to follow.

Back to my young student wanting to know what broadcast technologies he’d be working on in decades to come. My view of where we are in the following diagram depends on how many hours sleep I’ve had the previous night, and whether I’m comfortably on a profitable customer project or worried sick I might have a bad year: 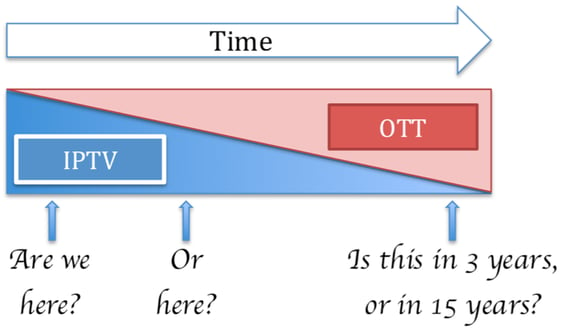 But the diagram delivers a clear message however I look at it, as much from my guts as from my brain: Whatever tomorrow holds, there will be more OTT then than there ever was before.

Even if the big TV-content-owning networks retain control of the market in coming years, they’ll need to go OTT themselves albeit just to reach their customers on multiple devices in different places.

Network operators have been screaming out for a reason to exist beyond dumb bit-pipes, OTT is part of the answer. Many of them are too exhausted from the unfruitful search over the last decade to notice, but OTT gives them the opportunity to finally get back into the mediation game if they are quick enough, before a Google, an Apple or some outsiders owns the market.

There’s no compelling reason to write IPTV off in the short-term and there are several good ones to get into OTT to complement whatever you’re doing in TV already. You might be interested in a white paper on this very subject that we just published with Harmonic, Broadpeak and Viaccess-Orca. See here

Benjamin Schwarz is an independent consultant, analyst & blogger in the IP and converging media space. He has deployed several TV services around the world and now helps others with his new outfit: http://www.ctoic.net His social media handle is @nebul2.