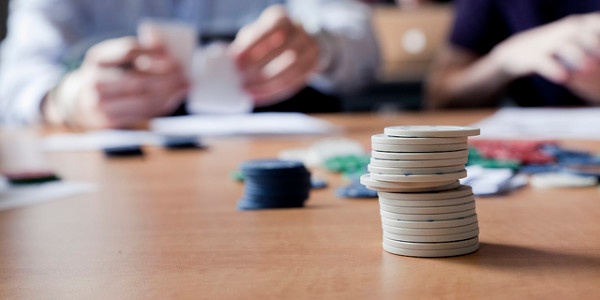 I’m probably not the first one to think about this – but I found myself spending some time wondering how the TV industry can apply the rules and practices of gamification.

Have you heard of some interesting case studies in that field? Here are my thoughts:

Gamification was coined in 2002 by a British computer programmer, but the method  started as a trend around 2010, first appearing on Google Trends in September 2010. It then became a huge buzzword in 2011 and in 2012 became the next profit making machine for businesses.  In 2013, major companies begun using and introducing gamification to real life objectives.

Now let's look at some…

Look at the frequent flyer programs that were introduced first in 1981 by United Airlines.

What are the key concepts behind this programme?

How could this be applied in the TV/video world?

Gamification theories suggest having at least three status levels. The basic level should already bring positive feedbacks, as soon as you start playing. The next one is for more advanced or senior players and the third one is for real experts. And so, once you've launched the "game" - how do you make the status of the players visible? Here you definitely need some social features – to share, for instance, the fact that you have been upgraded to the next status to your Facebook friends, or that you’ve received some kind of award from the service.

Let’s try to apply the status system to our market: what kind of status would be suitable for consumers of video services? “The Super Watcher”? “The Loyal Viewer”?  This may not be the kind of status that would bring self-achievement and recognition from peers.

The “Influencer” status, on the other hand, can also be a nice recognition and even a motivator for a user who is commenting, recommending, etc. A lot. This way you value those who discover and share new content among their friends and they can also help you to grow the ARPU! In addition, you can set up some kind of crowdsourcing approach to create metadata around programs.

Moreover, interest in content can make a lot of sense in the context of “gamificating” TV services: games can monitor the user’s interest in sports, in a genre such as fantasy or in a specific TV series like 'Game of Thrones'. The fact that a user watched many soccer games or all GoT episodes can score points in this respect. Quizzes as well are a great way to get credited with points. This concept could work very well for kids’ programmes as well. This relates tightly to content personalization systems which will contribute to the sophistication and intelligence of the service.

And what about the reward? These could include Free VOD, exclusive programmes, first pick at new shows, invitations to TV shows or the cinema, and so on.  These rewards can be granted directly in exchange for points or status, or granted by randomly selecting customers in order to engage them further.

The case of Farmville and Candy Crush

Addictive online games such as Farmville and Candy Crush are interesting to learn from - each for a different reason. Farmville requests players to water the plants every 6 hours, which is an amazing way to create a recurring usage of the service! What if the user gets points for watching two movie trailers every day? What if you lose your status if you don’t connect to your TV service for one week?

Candy Crush Saga gives players points when they promote the service on social networks; random benefits are even more engaging than secured benefits – they make the users want to try again and again!

Another interesting example – maybe less realistic – is Speed Camera Lottery: where authorities do not only record the drivers who drive over the speed limit, but also record those driving below the limit. Randomly some of the drivers below the limit are rewarded for their careful driving with cash which comes from the fines of the drivers who were “over speed limit”. One could consider applying this to content piracy for example.

You can also leverage some theories on gamification, such as GAME, which stands for Goals, Actions, Merit, Evaluation - in the TV industry.

-Goals is about aligning the goals of players with business goals, and coaching the players to understand what is expected.

-Action is about how to carry out the game itself. One has to choose the right type of gaming experience to meet the specific problems or the target audience- each action is represented in one of the axes below, let’s zoom in for a minute on the possible “actions” in gamification: 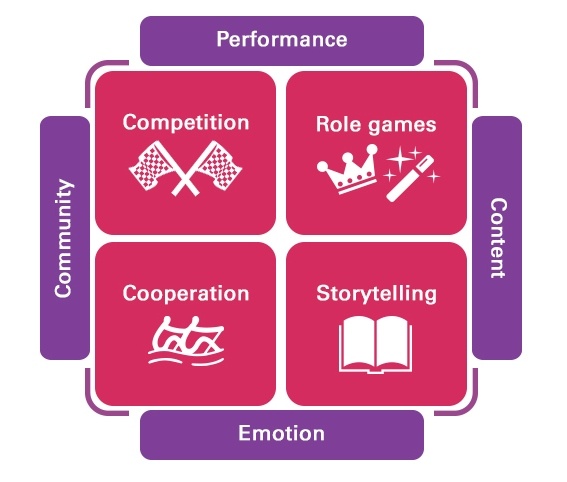 What is the right axis for our business and how could this be applied to the field of entertainment? Storytelling is the strongest direction, while competition works everywhere. And how do you create a game based on storytelling? Think about heroes, exploration, new universes, personalization etc.

Merit is about the incentives themselves, taking into account the experience and the motivation of the players.

Evaluation is important to check whether the objectives are met.

Whether they are "real" games, reward programs, or business methods - games are quite a good way to create audience loyalty and repeated visits by users. Also, games are very good at creating engagement - gamification can be part of a user engagement strategy. To some extent, these loyalties, or even- I dare say- addiction, is what content services providers dream to create! What do you think?

Share with us your ideas on how to integrate games into our market.