Netflix launched its latest slate of programming at the start of February, in a blog post whose opening few sentences described exactly what the fuss is about regarding TV content personalization.

“Internet TV knows no time slot, no genre and no geographic bounds,” it said. “Freed from these constraints, Netflix is able to program for over 93 million unique tastes of entertainment lovers around the world, from the romantic comedy lover in Paris to the sci-fi aficionado in Sao Paulo and everyone in between.”

And if that sounds like hyperbole, it isn’t. The Atlantic’s now-famous article How Netflix Reverse Engineered Hollywood, describes how the company has 76,897 different metadata tags it can ascribe to its content. Even if it only uses 10 of those to describe each film, we’re talking a number of possible combinations that ranks up in the tredecillions, i.e., a 1 with 42 zeros after it. 93 million unique tastes is comparatively easy.

Of course, the real world picture is rather more nuanced than the sheer weight of zeros suggests, but all this does highlight the growing importance, in fact the outright necessity, of TV content personalization. Operators pay a lot of money for content, either making it or licensing it. Getting that content to its destination in the face of increasing competition, sometimes truncated periods of availability, progressively limited attention spans and crowded screen real estate; not to mention the bewildering fragmentation of sources and devices, is not something that can be left up to chance.

Leaving viewers to find content randomly negates the investment made by the broadcast industry in creating and distributing content. And while guidelines regarding TV Personalization are still emergent, they do need to recognize careful consideration of the following issues:

1. The UI is critical

Too many early Smart TVs in particular, floundered with an interface that was either not easy to navigate with a handheld remote, or did not display the right content in a manner that made it easy to find.

2. Do not hold back on personalization

Figures suggest that more than three out of four views on Netflix come from either personalized ranking or recommendation. Given the limitations of attention span and real estate, the more effort that can be put into it the better. Most popular, most viewed, recently added…all these criteria trump previous non-interactive lists such as ‘sort alphabetically’ and help the titles in your catalogue work harder, as the chart below helps illustrate. 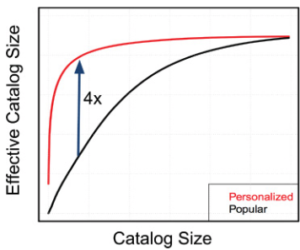 Data should be collected at every opportunity. This can be done in many different manners, from asking viewers to register for a service, to asking for likes, dislikes and so on.This can then be fed back to the user though dialogues such as ‘Because you liked XXXX’ which further reinforces the experience and helps develop trust in the system.

Recommendation systems are adaptable and operators need to be as well. Test constantly, test often, and refine and tweak your systems so that they are giving your viewers what they want.

The Final Piece of the TV Content Personalization Puzzle

If TV content personalization so far feels something like trying to hit a moving target, it is actually more difficult than that, because the nature of the target varies all the time. Viewers are not sitting in a laboratory environment reacting to the same stimulus in a controlled manner. Their moods change as the seasons change, the time of day changes, the weather heats up or cools down, or major events occur. And that’s just the big stuff. There are also smaller changes that occur in their personal lives: birthdays, whether a favourite team won that day, anniversaries and more.

The more granular detail, of course, requires the user to be sharing more with the operator. That degree of data mining is becoming more common as people become used to sharing information.That information is then traded between organizations (though such free-flowing and invisible movement of personal data is being looked at very carefully by regulators and law-makers around the world).

Contextual recommendation is the new frontier: algorithms that will be sophisticated enough and have enough data to work with, that they will be able to suggest what viewers want to watch at precisely that moment and get it right the majority of the time. And with sophisticated AI increasingly penetrating the home — Amazon has already incorporated its Alexa intelligent personal assistant into its Fire TV stick — TV personalization is going to become the new normal fairly rapidly.

Netflix CEO, Reed Hastings, stated at MWC2017 that all television content consumed will be on the Internet in the very near future. If so, the days of simply browsing content to see what is on may very well be numbered.