IBC 2013 was worth the wait! The halls were bursting with excitement as leaders from the broadcasting industry were demonstrating the latest innovations they cooked up. In between the ‘ooh’s and aah's,’ we kept our eyes wide open to spot which of the predictions of IBC trends came true, while highlighting VO’s innovations to an interesting and dynamic audience.

We predicted big changes in the UI and UX of products and platforms, in addition to TVE deployments, and it was clearly proved at IBC: Envivio, for example, demonstrated a range of innovative software-based solutions for “TV without boundaries.” As we predicted, Cloud services were also a major buzzword, as Harmonic, which used to be silent about its cloud partnership with Tata, started to openly talk about it. Attendees were talking a great deal about Accedo, who also featured their cost-effective cloud-based platform solutions in the show.

VO from our end,  unveiled the new UI of our TVE platforms, which attracted much attention from experts such as John Moulding of Videonet. After paying us a visit, he wrote, “Viaccess-Orca provided a great demonstration of how to cater for different TV discovery moods using the same companion screen.” Multiscreen tech was also (obviously) a hot topic at the show. It was great to have David Mercer of Strategy Analytics drop by to check out our multiscreen platform and later write, “From the technology-vendor side of the equation, Viaccess-Orca continues to demonstrate one of the most engaging platforms for multiscreen that I have seen.” The elements that linked all the conversations together consisted of holes within the pay-TV industry that needed to be filled, and the amazing companies that made these goals easier to accomplish.

There are many solutions out there that are addressing key challenges faced by the pay-TV industry these days. Operators can now educate themselves on trends of piracy and take relevant actions with VO’s Eye on Piracy, which made its debut at the show. To keep subscribers engaged, operators can count on TV Everywhere apps from VO, now enhanced with a new intuitive UI, launched during IBC as well. There were also discussions about hybrid offering of broadband and broadcast and cardless security as we demoed VO’s Hybrid TV solution.

And what’s a VO show without DEEP?! Yes, we also demoed our Data Enrichment and Engagement Platform. As a matter of fact, our EVP of Innovation, Dr. Ofer Weintraub, was interviewed by Digital TV Europe, where he gave a quick run-down of DEEP, as well as the importance of Second Screen technology for operators, and the drastic change in user consumption:

During an interview with the TV-Bay Broadcast Show, our Deputy CEO, Haggai Barel, discussed the key challenges faced by the pay-TV industry, such as content discovery, elements that make up the ultimate content experience, and more:

All this excitement and activity kept us giddy through the first few days of the show, but then came the cherry on top! DEEP won “Best Content Platform of the Year” in the ConnectedWorld.TV awards! 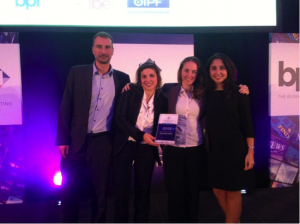 Between the connections, conversations about content discovery, interviews, awards, news coverage of our newly launched DRM solution, Connected Sentinel,, and even being included in TVB Europe’s “Best of IBC” list, I guess it’s safe to say that we will feed off of all the amazing things that came out of IBC 2013 for weeks to come. Our team is already putting on their thinking caps in anticipation of IBC 2014. Stay tuned to see what we have in store!   Go DEEP into Discovery and learn more about our Content Discovery solution which includes DEEP, the award-winning second screen platform:  Download our latest whitepaper