Considering that the 5G standard won’t even be ratified by the ITU until 2020, there is an impressive momentum building behind it already. And the reason why is because, from video delivery to the Internet of Things, it really does change everything. Two years ago, researchers at the University of Surrey’s 5G Innovation center in the UK set an astonishing new record for data transfer rates that still stands. Using experimental implementations of 5G technology, and working in laboratory conditions, they managed to send data around 100 meters, at a rate of 1 Terabyte per second — a speed at which you can download 40 HD films in a single second.

Of course, real world speeds are unlikely to get anywhere near that, but nevertheless the requirements for any ratified 5G standards are impressive enough., The Next Generation Mobile Networks Alliance specifies that they should include data rates of 100 megabits per second for entire metropolitan areas at a significantly reduced — even sub-millisecond — latency from today’s 4G peak.

By comparison, South Korea, the country with the fastest regular mobile connections in the world according to Open Signal figures, currently only reaches 42Mbps, while far more typical is the USA’s 13Mbps; the global average is 6.8Mbps.

The rough rule of thumb is that speed increases 10x every decade. And with 4G standardised in 2012, 2020 is the best guess for a mass rollout, though there are plenty of plans for limited appearances ahead of that; Huawei will have its first phase products on the market in 2018 with the Winter Olympics and Soccer World Cup both targeted, and Nokia and Ericsson have more than 75 5G projects underway between them alone.

Ericsson has recently unveiled a 5G platform which it has aimed at the first movers in 5G and estimates there will be a $582 billion market opportunity globally as telecom operators leverage 5G technology for industry digitalization.

“For operators, this represents potential to add 34 percent growth in revenues in 2026,” says the company.

Ericsson talks of no less than a ‘transformation of industry and society’ that will be brought about by the ubiquitous connectivity of hundreds of thousands of low complexity devices in what is becoming dubbed the Massive IoT, and how it interfaces with the Critical IoT where low latency allows for realtime minoring and control via extreme mobile broadband.

For anyone involved in video content it’s going to be equally transformative too. Cisco’s latest Visual Networking Index forecasts that by 2021, while 5G will only account for 0.2% of connections (representing a fairly meagre 25 million), that 0.2% will account for 1.5% of total traffic and, crucially, that’s 4.7 times more than the average 4G connection.

4G in turn will generate twice as much traffic on average per connection as 3G. Indeed it won’t be until 2021 that 4G will dominate the mobile landscape with 53% of connections, but they will account for 79% of traffic.

In other words, it’s increasing exponentially. 4G generates twice as much traffic as 3G, 5G ramps it up even further by a factor of 4.7x. No wonder Cisco can confidently predict that global mobile data traffic will increase sevenfold between 2016 and 2021. And it reckons that 78% of total traffic by then will be video.

This leads to some interesting crunching of some very big numbers and the realisation that each 5G phone will be consuming 30GB of data per month, 23.4GB of which will be video. The chart below compares the consumption of the different generations of phone by 2021. 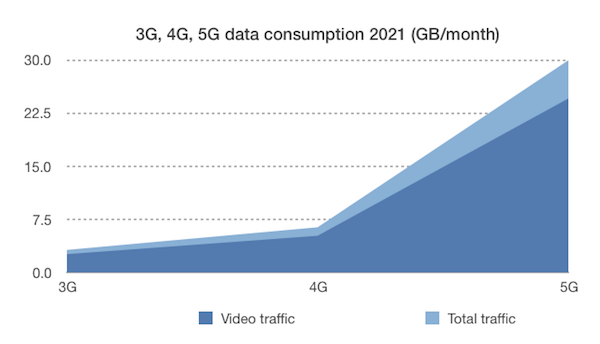 5G is both threat and opportunity depending on where you are positioned.

For anyone involved in video content it is a wonderful opportunity. The demand for mobile video is going to skyrocket and operators who have positioned their services to take full advantage of that ahead of time, with agile, responsive offerings that can quickly and easily roll out the new services consumers will demand as they become available, will be able to reap the benefits.

For many that will mean the cloud, and seeing the 5G storm clouds amassing on the horizon helps to explain why the industry is quite so interested in it all at the moment

For those that have to build and run the networks, however, it is a problem. Cisco figures already forecast that the total annual mobile traffic by 2021 will have grown to half a zettabyte. But if the trends of increased 5G data consumption are extrapolated forward, by the time 5.4% of the world’s phones are 5G, they will account for over 50% of all mobile data and will have helped push the total traffic carried over the world’s networks into previously unimagined territory.

Mobile data traffic has grown 18-fold over the past five years. It is currently forecast to grow a further 7x by 2021, but once 5G handsets start to take off, that figure is going to ramp up sharply. It might not be the 1Tbps that the University of Surrey achieved, but even so it’s going to be both impressive and extremely demanding.