Have We Really Reached Peak TV? 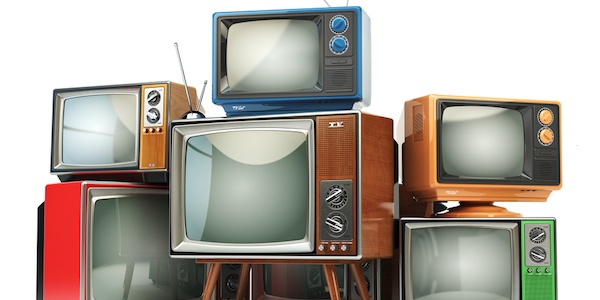 There is an argument that says we are in a new Golden Age of television as competition between the traditional TV industry and the new, digital players for viewers intensifies. But if we have genuinely reached Peak TV as a result, is the only real way from here downwards?

That there is more content on more screens than there ever has been before in television history is inarguable. We crunched the numbers last year and found that for one country alone, in this case the UK, the amount of primetime content available has increased enormously, rising from 12 hours per day in the 1970s to 2400 per day now. And that’s discounting online options.

Meanwhile, there’s the subjective sense that the quality of the shows on offer is improving as well as competition has ramped up. The big three OTT players - Netflix, Amazon and Hulu — are planning on spending over $10bn on television content this year, while pay-TV operators are increasingly focusing on original programming and not simply sports. As Millennials show more interest in episodic drama, HBO has responded by raising its budget to over $2bn a year, and broadcasters the world over are upping their hours of drama production.

As Simon Vaughan, chief executive of independent production company Lookout Point, said in The Guardian last year, previously there were just a few broadcasters who would develop dramas. Now things had “completely changed”. “You have over 100 broadcasters now who can act as a catalyst and pay the kind of money [required] – around £700,000-£800,000 an hour.”

And with the likes of Game of Thrones, Westworld and The Crown coming in at a reputed $10m plus per episode, you can see why the Golden Age thesis gains so many adherents. 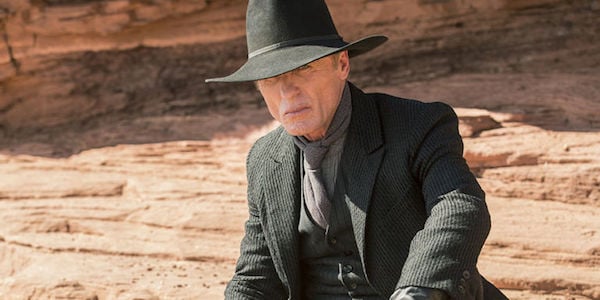 HBO's Westworld: one of the shows at the top of the Peak TV pile

You can also see why the negative aspect of all this abundance content has been explored. There are only so many viewers to go round, after all. According to Neilsen, between 2008 and 2014 the number of channels available to the average US TV household rose from 129.3 to 189.1, but the average number of channels actually watched only increased from 17.3 to 17.5. 2016 data saw that figure increase to 19.8 channels from 205.9, but if you chart the percentages there is a marked decline from 13.4% watched in 2008 to 9.6% in 2016.

Average daily viewing is down too, albeit at 4:39 per day, only 9 minutes down since 2014. But that masks a much steeper decline in younger, affluent viewers, who spend only around three quarters of the time watching TV across all platforms than those over 50.

FX Networks CEO John Landgraf first floated the concept of Peak TV at the influential Television Critics Association Summer Press Tour in 2015. “There is simply too much television,” he said, pointing to a steep increase in the number of original scripted TV shows from 216 in 2010 to 419 in 2015 and a projected 500+ in 2017. This, he says, is unsustainable. 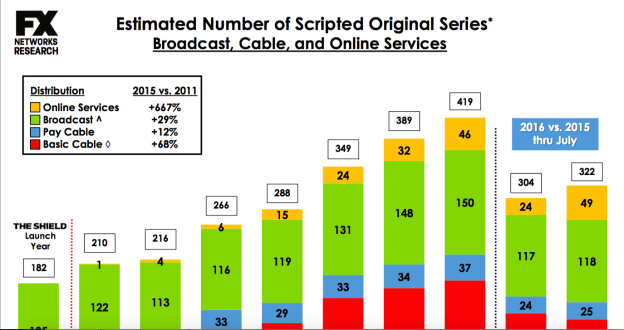 “I’m not saying that I believe we are in a bubble which is going to pop, causing us to go from 500+ scripted series to half that number.  Rather, I think we are ballooning into a condition of oversupply which will at some point slowly deflate, perhaps from 500+ shows to 400, or a little less than that.”

Another of Landgraf’s  interesting analysis was that the price for making and marketing an hour of television has gone up about 20% in the past 5 years, to $4-$5 million an hour. This figure is an interesting contrast to the British figure provided by Simon Vaughan above, considering that only about half of the scripted shows make money.

“He cited data that the top 20% of scripted series average 10.5 million viewers, the second 4.6 million, while the bottom two average 1.1 million and 380,000, respectively,” reports Deadline Hollywood.

“There is a really big, big difference,” Landgraf said. “You can pay for something in the first, second, and maybe third quintile (if you own it), but there just has to be a whole lot of shows that are losing a ton of money,” he said.

Landgraf broke down the number of projected originals to 150 for US broadcast, 50 for subscription cable, 180 for basic cable, and 130+ for online. And even if it shrinks down to 400 or so shows after it passes the peak, that is still almost double the number from under a decade ago. 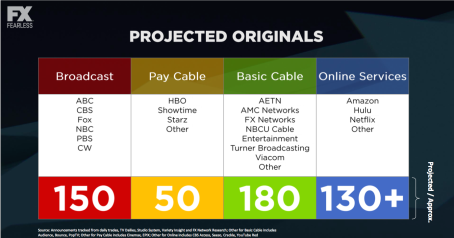 Is that sustainable? Can this Golden Age of television continue? Possibly yes. There is a definite sense that drama is the new sport amongst the Millennial audience at least, and there is without doubt a large audience for high-end, high-cost content. Where perhaps there is a fly in the ointment is maintaining that quality and that originality.

“I think it is particularly bad for storytellers and our culture if one company will be able to seize 40% of storytelling,” was one of Landgraf’s more pointed comments, referring to Netflix.

The key for operators will be, as ever, in guiding their audiences to the content they might want to see. When so much is being made, choosing the right scripts for original programming and bidding for the correct rights at MIPTV and elsewhere is only half the battle. Even after we have passed the absolute apex of Peak TV, we will still be awash in more content than we have even seen before and contextual recommendation — software that can reliably predict what someone will want to watch and when — will be the key to the success of many businesses.

The paradox of choice is that when so many of the options available are good ones, choosing the right one becomes harder than ever.

Explore our COMPASS Content Discovery Platform to see how it can help your viewers navigate the Peak and Post Peak TV environment and click here for more solutions.