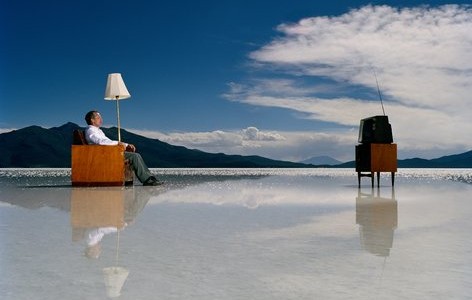 People who watch lots of television have long been defined as ‘couch potatoes’. The image that springs to mind is one of family members or a group of friends staring at a TV screen, while lounging on the living-room couch, nibbling snacks and drinking sodas. But the advent of multi-screen consumption combined with the rise of applications, is dramatically changing this picture. It is no longer about passive/group/single-screen viewing but rather an active/individual/multi-screen experience. So let’s explore the key elements of this transition:

Passive / active In the past, people watched TV passively, referred to as a ‘lean-back’ experience. Now, most viewers are doing something else at the same time: they are texting; searching the web on their tablet; posting a ‘like’ or sharing a photo via Instagram. What is interesting here is that the viewers' level of activity changes directly in relation to the shows they are watching. For instance, they use their smartphone to look up information about characters and actors in a series; they rate a programme on their remote or an application available on their connected TV and play along with their favourite TV show. So now, TV viewers have become ‘lean-forward’ individuals as they increasingly engage with TV programmes.

Group / individual For decades, only live TV was available and there was a limited number of channels  (until the early 2000s, the majority of the French population only had access to 6 TV channels!). Therefore,  you were restricted to watching your favourite programme at a prescribed time. With digital TV and video on the web, we now have hundreds of channels and millions of pieces of video content, which can be viewed at any time thanks to features such as VOD, catch-up or PVR. So if I want to watch what really interests me, what’s the point of sitting down with my parents (or my kids) to see something that I don’t like? As many consumption constraints have disappeared, TV viewing has become a fully-individualised experience.

One screen / multi-screen The TV set was once a totem, taking pride of place in most living rooms, where people would ritually gather to watch it.  With the proliferation of devices, that time has gone. From smartphones to phablets, from computers to connected watches, and ubiquitous networks (IP, 3G/4G, wifi), video content can be viewed on many different individual devices. And each is used in specific environments: smartphones for those on the go; tablets for relaxing in the bedroom; and computers while at work. Of course, we will still gather to watch a great sci-fi movie or the final of the World Cup on a nice 42’ HD flat screen, but this is only one option among many.

At the end of day, it no longer seems accurate to describe those who spend hours watching TV as couch potatoes. I believe we should rather call them ‘rocking-chair shufflers’, as they sit alone on their chairs, leaning back or forth, depending on their form and level of engagement with the programme they are watching.Dispensing with the potato description might also be seen as a sign of progress.