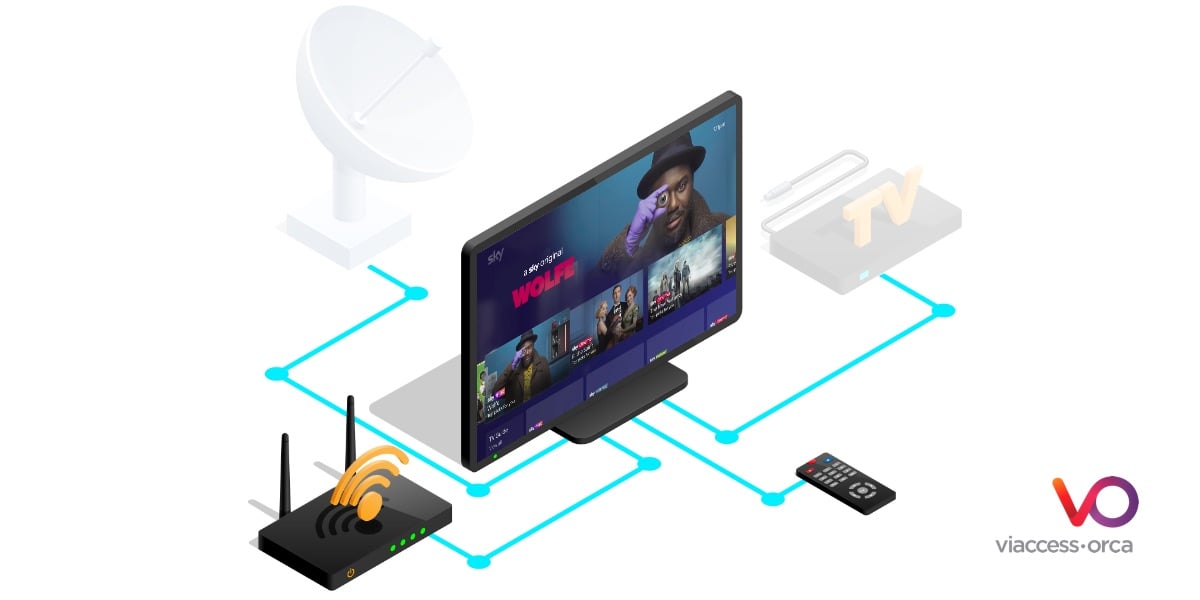 It has long been rumoured that Sky TV has been working on a streaming solution that will enable it to ‘ditch the dish’ and offer services without the need for users to install a satellite dish. It turns out that wasn’t ambitious enough for the Comcast-owned Pay-TV broadcaster though. It has also ditched the set-top box and unveiled what amounts to a whole new model for the broadcast industry: a branded Smart TV with its services already baked in.

Launching in the UK as early as next week and rolling out in other Sky territories from next year, there is a lot to talk about here to understand quite how significant this is. Here are some of the highlights.

All in all, it’s a highly impressive bit of kit and consumer reviews have already been favourable. While it may not perform quite as well as the highest-end OLED screens found at the home cinema end of the spectrum it’s a fine mid-range set, the Dolby Atmos implementation is judged impressive, and it makes the most of the Sky EPG, already considered to be one of the best in the business.

It is a bold move, though. Any move into manufacturing is a tricky one, and even more so at a time of global supply chain shortages. Plus the return of the rental TV, a business model long since though abandoned, is a surprising one. But to a consumer market now used to paying for tech in a similar way it makes sense. And certainly the company has the software and UI expertise to make what we used to refer to as ‘the battle for HDMI 1’ a thing of the past. If you control the entire TV, that battle has just been won hands down.

In the markets it operates in, Sky is synonymous with two things: satellite and sports. For it to be ditching one is therefore a fairly major event. Much in the same ways that TV aerials have started to disappear from houses, the satellite dishes may soon follow — along with the set-top box.

A South Korean Internet service provider, SK Broadband, is suing Netflix to pay for costs from increased network traffic and maintenance work because of a surge of viewers. According to the deposition, Netflix’s data traffic handled by SK jumped 24 times from May 2018 to 1.2 trillion bits of data processed per second as of September, riding on the success of several Netflix productions from Korea including Squid Game.

In the context of the new Sky Glass news above, the Guardian opened the can of worms marked ‘net neutrality’ with a feature looking at the dramatic increases in web traffic that streaming is leading to. And, perhaps more to the point, who pays for it.

“Every terabyte of data consumed over and above current levels costs about £50m,” commented Marc Allera, the chief executive of UK telco BT’s consumer division. “In the last year alone we’ve seen four terabytes of extra usage and the cost to keep up with that growth is huge.

“A lot of the principles of net neutrality are incredibly valuable, we are not trying to stop or marginalise players but there has to be more effective coordination of demand than there is today,” he continued. “When the rules were created 25 years ago I don’t think anyone would have envisioned four or five companies would be driving 80% of the traffic on the world’s internet. They aren’t making a contribution to the services they are being carried on; that doesn’t feel right.”

Of course, in some countries they are. In the US streamers pay fees to ISPs to score faster speeds and Amazon and Facebook do the same in South Korea. The big companies also argue that they have their own networks routing traffic globally across the web before delivering it to the ISPs’ effective doorstep.

Either way, however, the sheer amount of data being consumed, and video in particular, means that the argument is likely to flare up again soon. According to one analyst the amount of data consumed per household per month has risen 2400% over the past 10 years, from 17GB to 429GB. And there are no signs that that rate of change is going to decelerate any time soon.

Meanwhile, Europe’s broadcasters are fighting back against the streamers. Reported in Rapid TV News, stats from Ampere Analysis show that in Q2 2021, the leading free-to-air groups in Western Europe’s largest TV markets — UK, France, Germany, Spain, and Italy — commissioned nearly 600 brand new first run TV shows for their channels and VOD products. This represents an increase of 23% over pandemic-hit Q2 2020, and, perhaps more impressively, a massive 64% over the same period in 2019.

Unsurprisingly, unscripted content has seen the biggest rise in volume, accounting for 80% of all commissions in the first half of this year. There has also been a rise in new commissions for the owned-and-operated on-demand platforms, with 16% of all new programmes destined for these outlets.

European groups on the whole though were found to have been slower to prioritise VOD-based projects than their US counterparts, where titles made for VOD platforms now represent between 35%-40% of greenlit new projects by US broadcast and network groups.

This is leading to an interesting switch. As Ampere’s Richard Broughton points out, many European broadcasters have historically relied on licensed content, and US imports in particular, to fill linear channel schedules. “But as US media giants increasingly turn their attention to their own platforms, buyers have needed to find alternative options to bolster their slates for both linear and VOD to compensate for an increasingly siloed market,” he says.