The Road to IBC: “Multi-Screening”, When the Kindle Really Fires Up! | Viaccess-Orca Blog 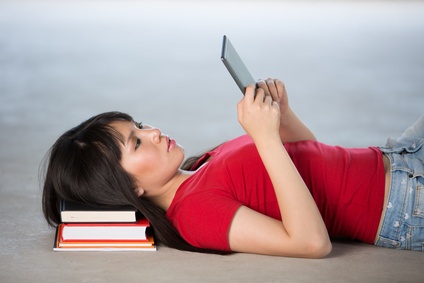 When launched in the early 2000's, the e-book was expected to revolutionize the publishing world. Consumers would be able to stroll through the world's largest libraries with the click of a button, the low costs associated with electronic publishing would lead to a dramatic reduction in prices and the struggling publishing industry would find a life jacket.

Several years later, it is fair to say that the revolution has arrived. As the popularity of e-readers continues to soar, e-books have become the highest selling format in American publishing surpassing hardcovers during 2011. This according to a report published by the Association of American Publishers. It is estimated that during 2012, e-book sales will top the 970$ Million record set the previous year.

And why not? The e-readers have brought about much wanted change.

For one thing, there is no need to actually go to a library in order to find a book. People can now purchase Alice in Wonderland as they go down the rabbit hole known as the NYC Subway system. Secondly, we can finally get rid of the funny named Swedish bookshelves purchased at Ikea. E-readers have also ushered a new dawn of do it yourself in the publishing industry. A young writer can now simply publish his first novel through Amazon or Barnes and Noble e-readers without having to grovel at the feet of publishing houses. This is part of the trend known as "death of the middle man" which is best exemplified by the birth of new megastars on YouTube such as The Beaver.

Lastly, figures released by Amazon indicate that readership is up across America as people who own Kindles read more than they used to before owning the e-reader.

But now, something has changed. Look! up in the sky! It's a bird, it's a plane, it's....people using their Kindle Fire to watch TV? What happened to all those books we talked about?

It turns out that people have become accustomed to using all the screens at their disposal in order to stream their favorite TV content. You've heard of multi-tasking? Well this is multi-screening. That is using your smartphone, laptop, tablet and now also your e-book reader, in order to catch the latest episode of The Big Bang Theory.

One might argue that using an e-reader in order to view TV content is in direct contrast to the vision outlined by its creators only a few years ago. After all, the idea was to enable a child in Chicago to walk amongst the halls of the Great Library in Alexandria and not "waste" his time on another sitcom. However, there might be a lesson to be learned from this recent shift in consumer behavior- people expect the consolidation of all devices into one. That way, they can read A Tale of Two Cities while saving an episode of Sex and the City for later in the evening.

So will streaming TV content bring about the end of the e-reader as we know it? Not necessarily. It might just be another step in their evolution. But if the e-readers are in fact about to become another TV screen, viewers are going to need platforms with which to stream the content, and lots of it.

Check out the exciting possibilities afforded by Viaccess-Orca and see how you can take part in the next stage of the e-reader evolution. Want to learn more about our innovative solutions? Visit us at IBC (Stand 1.A51). To set up an appointment with Viaccess-Orca at the show, please email us