The Second Screen and Sports - What’s Next? | Viaccess-Orca Blog 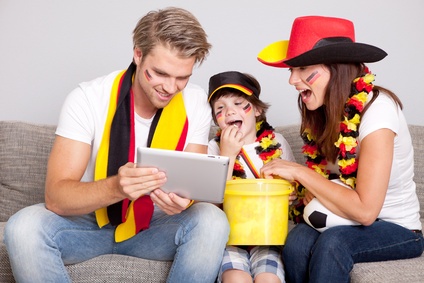 The French author André Maurois said that business is a combination of war and sports. When it comes to second screen applications, the prolific author was correct.

Second screen applications that transform passive television viewing into an interactive experience have never before been so popular. This recent surge in popularity coincides with a shift in consumer behavior as most people now use other devices, such as tablets or smartphones, while watching TV. A Nielsen report dated April 2012 revealed that up to 88% of tablet owners, and up to 86% of smartphone owners, use their devices while watching television.

In addition to offering consumers a new kind of viewing experience, second screen applications also hold much promise for content providers, advertisers, brands and other stakeholders who could use such applications to generate additional revenues. So it should come as no surprise, especially not to Monsieur Maurois, that war has been declared between these numerous parties who wish to dominate the emerging second screen market. And the main battlefield is not Waterloo but rather sporting events.

In an attempt to increase viewership of sporting events, content providers now offer additional materials via second screen applications. These include unseen footage, information on teams and players, important statistics, coverage of other sporting events and more. Second screen applications lived up to their promise during the 2012 Euro soccer tournament. IAB UK and ESPN UK found that 54% of the viewers used another mobile device for second screen activity while watching the tournament.

The 2012 London Olympics served as an enormous opportunity for additional content providers to showcase their latest second screen applications. Such was the case with the British newspaper The Guardian which offered a novel application for Android tablets, iPads and desktops. Marketed as “your indispensable London 2012 companion”, The Guardian's app offered users live blogging, expert analysis, continuing coverage of sporting events and up to the minute updates of breathtaking sporting achievements.

The Guardian was not the only news organization to capitalize on this sporting extravaganza. As Queen Elizabeth II declared the Olympic games open, NBC launched its own second screen application that delivers additional content  to viewers through Android phones and tablets, iPads and iPhones.

The use of second screen technology does not need to be limited to sporting events. The majority of viewers already use mobile devices while watching different forms of television content. So it’s all a question of supplying consumers with information that is relevant to the content being watched at a specific time. In other words, second screen suppliers are destined to play the role of matchmaker in this digital marriage between the viewers and the content.