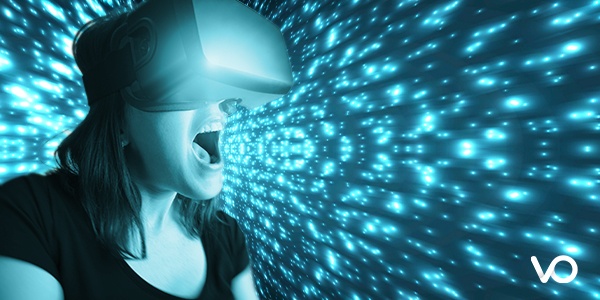 Analysing new technology and the impact that it’s going to have on society at large — or even one specific sector of an industry — is an ever-more tricky business. Not only the pace of technological change is accelerating all the time, but the speed with which it is being adopted by the consumer is as well.

Take a look at the chart The ever-accelerating rate of technology adoption, which documents the number of years it took for one quarter of the US population to use a new technology. The telephone took 35 years to reach what we can loosely define as the mass market, the television took 26, the PC took 16 and the internet was used by 25% of people in the US in a mere 7 years. 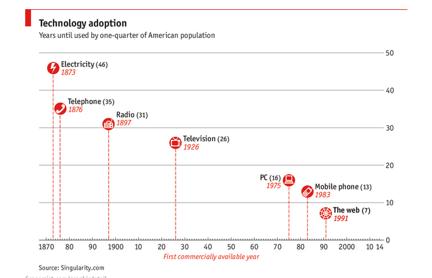 Even if the rate of technological diffusion stabilses at a 7 year period, it still represents a huge problem for any firms or organisations with a vested interest in technology as, by the time a standard R&D cycle is completed, the market topography could have already been completely disrupted by something else. What’s worse is that a new product doesn’t even have to actually exist to create significant waves: such is the speed of information diffusion and discussion that even chimeric technologies and vapourware can have a significant effect on investment decisions.

Which is where the Gartner Hype Cycle for Emerging Technologies comes in.

Basically it plots where a new technology sits on a visibility curve and breaks down the technology life cycle and how it relates to not only to the tech itself, but also the media, industry and society surrounding it.

The five stages, taken from Gartner’s own explanations, are as follows:

These are all broken down further into sub-sectors — from R&D at the very start to High Growth Adoption at the end). Apart from the joy of delving into the further reaches of the internet and uncovering old hype cycle charts (this one from 2004 which sees HD displays just heading into the Trough of Disillusionment is fun) it is very interesting to see the progress that Virtual Reality (VR), Augmented Reality (AR) and other broadcast technologies have taken along the curve in recent years.

Interestingly, VR first appears in it modern appearance in 2013 — right at the bottom of the Trough — showing how much of a left-field proposition it was until quite recently. Over the course of the next two years it moves on to a position right on the cusp of the Slope of Enlightenment (second gen products, some services) though at all times Gartner’s icon for it never wavers from a 5-10 year journey to the Plateau and mainstream adoption.

Augmented Reality first appears on the chart back in 2005, but we pick it up making the transition to the Peak in 2009/2010, around the time that, according to a further breakdown of the chart, mass-media hype begins. Since then it’s raced round the Peak (supplier proliferation, activity beyond early adopters, negative press begins) and is currently plunging down into the trough (supplier consolidation and failures, second/third rounds of VC funding).

So, what comes next?

Well, according to the standard cycle the Slope of Enlightenment sees methodologies and best practices developing, as well as third generation products appearing before then the mass market is reached (again defined as between 20-30% of the population). Gartner still estimates that this is a 5-10 year journey for Virtual Reality, despite the fact that there is other tech further back along the curve that will reach the mass market first.

It can get taken by surprise though. Between 2010 and 2012 something called Internet TV — OTT we would probably refer to it as now —  transitions across the Peak, before disappearing off the chart all together despite being labelled as having a 5-10 year deployment. That is because it has accelerated to the mass market far faster than anyone ever expected.

VR could well do the same. Having appeared on the charts from nowhere it could disappear as swiftly, not due to obsolescence but because of breaking through to the mass market far more quickly than anyone ever realised.

Live streaming is already happening. CNN streamed the Democratic debate in the US live in VR on October 13th and, while the reviews were mixed, you have to factor in what a leap that was for the technology and how quickly progress is going to accelerate once consumer headsets hit the market in 2016.

“The length, the fact that it was live, and the nature of the content … all added up to a real moonshot for us,” said NextVR co-founder David Cole.

Seven years to the mass market? That would mean VR will be mainstream by 2020. And that, from the perspective of all the investment and endeavour that is happening right now, seems almost pessimistic.