Celebrating Women in the Broadcast Industry

International Women’s Day takes place on 8 March and is the perfect time to celebrate the contribution that women make to the broadcast industry as well as acknowledge that more still needs to be done in terms of equality. 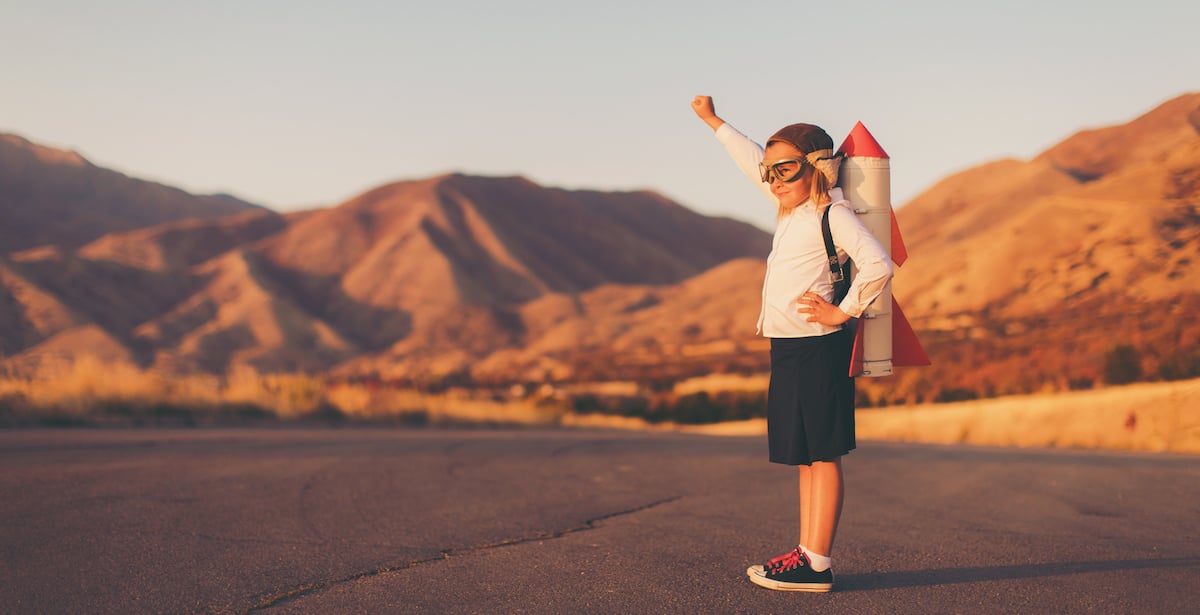 We have come a long way, but there is still further to go.

The first International Women’s Day Gathering was held in 1911 and supported by over a million people in Austria, Denmark, Germany and Switzerland. It built on the back of notable campaigns for women’s equality, and voting rights in particular in the USA and the UK. Over a century of activism, protest, and pressure since has improved gender equality remarkably in many countries in the world, but it’s still not where it needs to be to be considered just.

The OECD estimates that half of the economic growth in the past 50 years is accounted for by greater education achievement and a large part of that in turn is down to more girls reaching higher levels of education and an increase in the gender equality of the number of years spent in school. However, it also states that, as an average across OECD countries, women earn 16% less than men and female top-earners are paid 21% less than their male counterparts.

As the IWD’s website puts it, great improvements have been made, but: “The unfortunate fact is that women are still not paid equally to that of their male counterparts, women still are not present in equal numbers in business or politics, and globally women's education, health and the violence against them is worse than that of men.”

Women in Technology by the Numbers

OECD: “Companies with a higher proportion of women in top management do better than others.”

As an illustration of the current situation, Statista performed some number crunching ahead of last year’s International Women’s Day looking at the role of women in several major US tech companies. The chart is below. As Statista points out in its notes, the percentage of women in the US labour force has climbed to 46.8%, but is still significantly lower in the tech sector. And lower still when it comes to leadership positions. 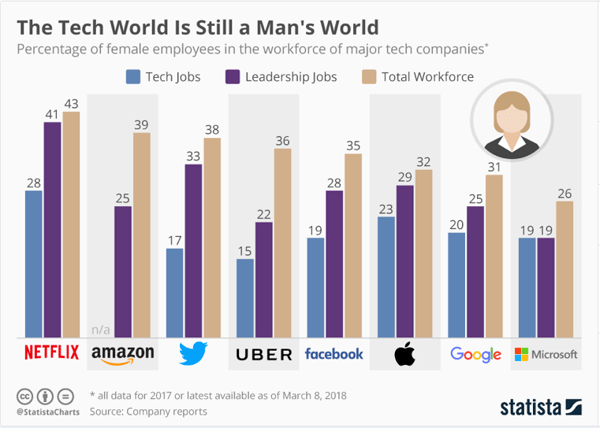 As a whole, the UN estimates that only 25% of the digital industries’ worldwide workforce are women.

In 2017, the United Nations celebrated International Women’s Day under the official theme ‘Women in the Changing World of Work: Planet 50-50 by 2030’. If we’re going to get there as a society as a whole in a mere 11 years, there are still many issues that need to be addressed. We asked Christine Maury Panis, VO’s EVP, General Counsel and Security, and the highest placed woman in the VO workforce about where we are, what can be done to improve equality, and where we are heading. As we said at the start, we have come a long way, but there is still further to go. 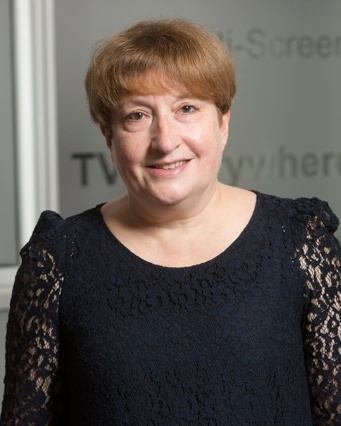 Q: Looking across the broadcast industry, does it still seem that there is a glass ceiling in place?

A: Yes there is one…even if the situation has evolved a bit these last two years, it still remains that this industry keeps being dominated by men; especially by male engineers, managers, and computer scientists. There is still a big difference between male and female salaries, especially for management and executive roles.

In the TV sector, there are still many stereotypes especially when it comes to women; they still need to continue to be young and attractive to have a role on TV.

Q: How have things changed over the years for women in the workplace?

Women have also massively used social networks to be heard and to set up movements like #metoo and other similar movements. Thanks to these, certain male behaviours are no longer tolerated and can be instantly denounced.

Q: What more can companies such as VO do to achieve genuine equality?

A: Have more female managers, engineers, and more women in research; listen to them, value their ideas. Women tend to voice their opinions and have a more helicopter view; they prioritise ergonomic perspectives and not strictly technical and engineering approaches.

Companies can also share more digital knowledge internally, as the in-depth understanding of digital still remains the privilege of a limited number of persons at VO, more often men. Women are still overrepresented in the support functions. VO could also do more externally to promote and explain digital, and continue to attract a greater diversity.

Q: Let’s widen the argument out to diversity in general: how do we as an industry become more diverse and inclusive?

A: By being more international, multi-cultural, by acting more as startups, emphasizing innovation and not just updating older patterns. In terms of management, forget about the ‘good old’ famous schools like Polytechnique and HEC in France, or other famous universities worldwide, and change leadership patterns. Empower those from various backgrounds and promote more diversity in general.

Q: Lastly, for those of us proudly bringing up a new generation of women, how do you think the next decade or so will change things further? How will the experience of the new entrants in the industry be different than it is today?

A: The new generation of women will only have known the digital area; this is a given for them, since they have not ‘discovered it’ like previous generations. They have seen their parents suddenly addicted to their laptop, their mobiles and their 24/7 connection to the workplace; already they have some distance vis à vis these type of behaviours. They will of course, continue to benefit from digital, but they also will know how to appreciate human contact and relationships, and enjoy simpler things. See, for instance Facebook; the young adults massively unsubscribe and more and more do not accept its particular form of social media. Social media will therefore evolve.

They also have a different use of digital, and use it more for e-health, more home schooling or e-education (especially for disabled children). They wish for less discrimination, and above all tend to be less attracted by luxury items and to purchase less expensive mobiles, computers, etc. They have more awareness in terms of the origin of cell phones and computers, of the environmental and social impact as to where and how they are manufactured, and by whom, as digital has given their generation full access to this information!

They have different attitudes to their careers, and digital will allow for new configurations, such as remote work, different lifestyles, and more.