Android Fragmentation: The Problem That Won’t Go Away 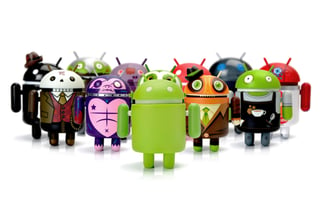 One of the best ways of visualizing the problem of Android fragmentation is to track the installation of new operating systems across mobile devices.

According to the latest Gartner figures released earlier this year, 99.6% of all new smartphones run Android or iOS, with Google’s Android having the majority of the market share at just under 82%. And that is pretty much where the good news ends for Android. This post will discuss the huge challenge that Android Fragmentation presents and discuss solutions that operators can utilize to combat it.

Because Apple controls the entire ecosystem for its devices it can maintain a much tighter control on all aspects of their manufacture and deployment. It’s a strategy of control that nearly killed the company off in the 1990s when it was being urged by investors to open up the Macintosh operating system to OEMs, but is standing it in good stead now.

Three weeks after the release of the latest iOS 11, in terms of adoption rate the new OS was neck and neck with the previous iOS 10 on 47% of all users. That is a remarkable performance, and Mixpanel figures for previous operating systems tend to suggest that eventually that number will top out at well over 90%.

The contrast with Android is equally remarkable and illustrated in the graph below. Data: Google.

So, that’s Apple’s latest OS on 47% of all devices, Oreo on 0.2%. Given that OS updates aren’t just pretty and full of new functions but also carry important security updates, you can see the problem that Android has.

Android Fragmentation by the Numbers

The difficulty is, of course, caused by the sheer volume of devices running the Android operating system. It is a classic case of being a victim of its own success. Whereas Apple’s iOS only has to serve a handful of devices and is centrally controlled, Android is deployed across thousands of devices and each manufacturer is in charge of their own updates. Exactly how many devices is a debatable number, especially as OpenSignal, long the measurer of such things, seems to have stopped tracking the Android fragmentation figures after 2015.

Some recent data from app developer iA Writer gives a window into the current state of play. In a blog post the company writes that they have found that Android now comes in 14,290 flavors of phones and tablets: that’s 14,290 different brands, different resolutions, different processors, and different screens, all of which it illustrates with an impressively large graphic.

“Designing for a gazillion phones and tablets doesn’t make our job easy,” they say, “but it is exciting to see how smoothly it works in spite of that, both technically and design-wise.

Android isn’t just about variety though, it’s about sheer volume as well. At Google I/O in May, CEO Sundar Pichai announced that it had passed the milestone of two billion monthly active devices.

And that is what Android fragmentation really looks like: a total of over two billion versions of more than 14,000 different devices in use every month. And it’s worth pointing out that the last figures that OpenSignal delivered for Android Fragmentation hinted at a mammoth 24,093 devices on the market in 2015, so they could conceivably be higher.

The result of all this is what has been referred to memorably by Tim Cook and others as “a toxic hellstew of vulnerabilities.”

So, what can operators do about this, especially when you consider that a new report from Ovum hinted that 72% of respondents to a survey about the future of the set-top box are considering an Android platform for future set-top rollouts?

One thing they can, of course, do is deploy VO’s standalone VO Player. This not only securely solves Android Fragmentation, but also supports iOS and other codecs, meaning that one solution works for all mobile devices.

For its part, Google is still trying to make headway on the problem too. It is reinvigorating its Android One initiative in collaboration with manufacturer Xiaomi, and rekindle interest in an entry-level smartphone designed to run “a pure Android experience” that it can control and update with exactly the same sort of centralized power that Apple deploys. And, of course, it also spent $1.1 billion in September acquiring HTC's smartphone design and engineering arm to bolster its own hardware division and attempt to make the next versions of its already well-regarded Pixel 2 phone even more compelling.

Will it succeed in bringing the situation under control? Predictions in the field can be dangerous. Circling back to Gartner, in 2013 the analyst confidently asserted that Windows Mobile would overtake iOS by the end of 2017. In September this year Microsoft admitted that, with a sub 1% market share, it was no longer actively developing the software.