Every year it seems that the industry asks if  Satellite TV is dying, but every year it is still with us. What makes it such a continuing valid route to market for broadcasters?

One of the meta-stories you will find occurring throughout the TV industry over the last two decades is the one that insists that the future of Satellite TV is in trouble. With the recent far-reaching structural changes in the industry, they have grown in number too. The rise of the major SVOD OTT players has been phenomenal to observe. On the global stage Netflix and Amazon Prime Video have expanded first from the US to core markets in the developed world,  then  to become true global providers.

The current Netflix coverage map below has been stable since January 2016. It covers over 190 countries, with China remaining the sole significant holdout, and Crimea, North Korea and Syria being denied access due to US government rules. Amazon Prime Video’s is virtually identical following its own global expansion in December 2016. There are also significant regional players such as Hulu to be considered.

Despite all this activity, the satellite industry is not dying, actually it is still going strong. In spite of the meteoric rise of OTT and consistent pressure from other sources, satellites are still being launched and the channels they carry still have subscribers.

Indeed, there is even potential for growth in satellite TV as two reports published this year have illustrated.

As part of a pattern of growth in global Pay TV subscribers to 1.05 billion identified by Dataxis, between Q216 and Q217, the DTH (Direct to Home satellite broadcasting) market grew by 7 million subscribers from 238 to 245 million. Cable fell by roughly the same amount, from 578 million to 572 million, while most of the growth of 60 million subscribers overall came from IPTV and Linear OTT.

Just shy of 3% growth for satellite TV isn’t the sort of figure that will set the world on fire, but given the external pressures it is under, it is significant.

Meanwhile, as the preface to the 9th Edition of NSR’s Linear TV via Satellite points out: “It is sometimes easy to forget that video markets remain the single largest driver of satellite revenues worldwide, and are expected to continue to do so moving forward.”

As reported in Broadband TV News, according to NSR, linear TV via satellite will remain a global growth market with over 12,200 new channels being established over the next 10 years, giving a total of over 53,600 channels by 2026.

The question is why? Why would operators still chose the DTH route in 2017 and beyond?

The Future of Satellite TV: Why is it Still Viable?

First off, it’s worth pointing out that space remains expensive. In 2008, NASA estimated that it cost $10,000 to put a pound of payload in Earth orbit, and stated a goal to reduce that cost to hundreds of dollars per pound within 25 years and tens of dollars per pound within 40 years. According to its latest prices, Elon Musk’s SpaceX has already got that figure down to $1,529; that’s still $90 million per launch of an expandable Falcon Heavy rocket. Add in satellite build costs, and you don’t see much change from $300 million per satellite.

However, once they are on station they can cover an enormous area. Astra 3B, for example, at orbital position 23.5º E, was launched in May 2010 and has 64 transponders, carries 243 channels (132SD, 110 HD and 1 UHD), and reaches 35 million households, including 3.5 million satellite homes across MENA, Europe, Russia and the CIS.

That makes satellite a remarkably cost-effective way to reach large numbers of people. This is especially true in emerging markets and large territories with dispersed populations, where the cost per home of deploying broadband and DTT technologies can rise quite significantly as population density falls outside of urban areas. It’s an extreme example perhaps, but the rich markets of Australia are distributed at a rate of 3 people per square kilometer, an audience almost tailor-made for satellite.

Meanwhile, an influential Euroconsult report from 2014 suggested that nearly 100% of the growth in subscriptions, revenues and the number of DTH TV channels by 2023 would be accounted for by emerging markets, which would make up nearly 80% of the total overall.

Another factor in satellite’s favor is the inconsistent speed of broadband networks, which beyond clustered urban populations, can be very variable even in countries with advanced telecoms infrastructures.

Netflix analyzes data transfer speeds from its 109 million worldwide members, who as they watch a combined total of more than 125 million hours of TV shows and movies every day, provide it with a lot of data to go on. It currently lists Switzerland as having the highest sustained average speed at 4.14Mbps. Leading territories in other regions include the USA at 3.74Mbps and Singapore at 3.77Mbps.

According to the company’s own help files, this means that most countries aren’t even reliably capable of watching HD. It lists 3Mbps as being recommended for SD quality streaming, with HD not being practical until 5Mbps and 4K requiring 25Mbps. That means that despite a growing catalogue of Ultra HD titles and investment in the format, the vast majority of those 109 million subscribers are going to struggle to view them.

High Efficiency Video Coding (HEVC) will change some of those parameters. As we wrote at the time of Apple’s adoption of the codec with iOS 11 and High Sierra, the first generation of its implementation provides roughly 40% compression savings over the preceding H.264. That should bring the necessary bitrates for accommodating the higher resolution formats down to 2.5Mbps for HD and 15Mbps for 4K.

Interestingly, the widespread adoption of HEVC is one of the factors that the NSR report says will have a negative impact on satellite growth, especially when considered in video distribution to Cable and IPTV headends. Certainly it means that the widespread adoption of satellite 4K will not be the bonanza the fleet owners might once have hoped for.

It does make 4K distribution by satellite more realistic and affordable though. As an example of what is possible if you have the resources, UK broadcaster Sky was one of those pioneering this sort of deployment with its Sky Q set-top box, a state-of-the-art 12 tuner device that launched in February 2016 with an Ultra HD service debuting later that same year. The box uses existing domestic installations, simply swapping the LNB on the domestic satellite dish, splitting the 4K signals and passing them down two coaxial cables to two waiting tuners.

So far the box, which is a premium unit in itself (though Sky does not charge extra for UHD content) has been adopted by 1.6 million of the company’s subscribers in the UK and Ireland, or just over 13%. It will be rolled out this financial year to Italy, Germany and Austria.

Another factor win in satellite’s favor is that operators thinking about launching Ultra HD services are also becoming increasingly aware that they do not operate in isolation, but are in fact bound up by the political and legislative landscape around them. This has become increasingly obvious as the whole concept of net neutrality has become a political football in the USA.  Although individual satellites only have a forecast lifespan of 15 years or so, satellite solutions now seem comparatively future-proofed and stable by comparison.

They are also still expanding into new markets. SES launched SES-15 (below) earlier this year, a new communications satellite designed to serve major global inflight connectivity and entertainment providers 'who have made significant, long-term pre-commitments." 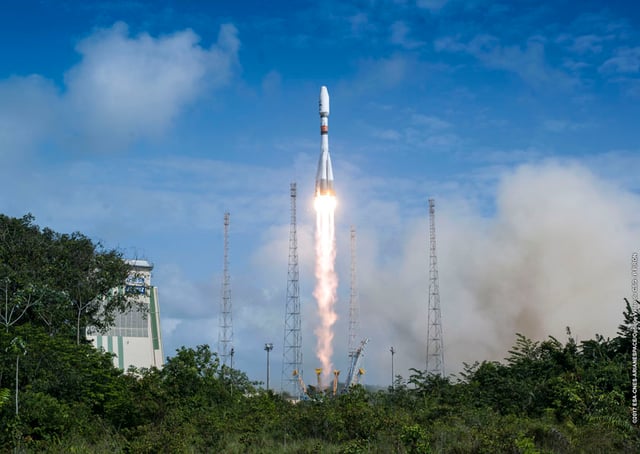 In a wide-ranging report into market-leader SES’ satellite TV business published earlier this year, Berenberg Bank struck an optimistic note looking at the future of the industry as a whole. Quoted by Satmagazine, it noted resilience in linear TV viewing despite the increase in the availability of OTT alternatives, and cited SES management as saying that the break-even point for satellite transmission over terrestrial was in the region of 50,000 daily viewers.

“It is for this reason that we believe that, despite an apparently consensus view that TV via satellite is on its way out, broadcasters are today signing distribution deals with SES that are at least as long as they were historically (c.10 years),” said the bank.

The 50,000 figure is somewhat disputed though. A Deutsche Bank report from the same timeframe estimated that the break-even point between satellite and OTT is higher than that and a channel needs over 125,000 daily viewers before satellite makes economic sense. What’s more, it says that this inflection point is changing rapidly and is being driven upwards by a 15-20% annual deflation in OTT costs. As a result, it estimates that the break-even point for satellite will need to be as high as 250,000 daily viewers by 2020.

“For a majority of channels globally, and 85% in Europe (where viewing is more concentrated), online-only distribution would be a cost-viable alternative to satellite from 2020,” the report says. “This is far from saying all of these channels will leave satellite; there are still quality, piracy and security issues.”

This is a key point: there are other considerations that have to be taken into account, not just cost. Plus it seems that the DB report is not allowing for the increasing price-competitiveness now being found in the satellite sector.

Like any technology, satellite TV has its pluses and minuses, but Berenberg’s identification of decade-long deals still being signed with SES argues that many broadcasters still have confidence in its ability to deliver large audiences with almost bulletproof reliability.

Add in the growth of hybrid technologies such the evolving HbbTV standard and developments in providing alternate return paths, not to mention the attraction to broadcasters of linking live and on-demand content to customers who are already connected to an Internet Service Provider, and you have a technology that will, in all likelihood, still be relevant for many years to come.

Certainly the satellite industry itself thinks so. Euroconsult estimates that 150 new satellites for communications and broadcasting services will be launched between now and 2026. In other words, Is Satellite TV dying? Hardly, it is still very much a part of the future of television.