Solving the Puzzle for Broadcasters & Operators 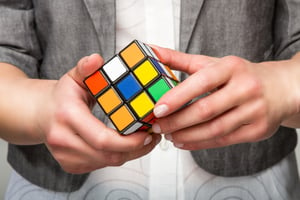 The Rubik’s Cube puzzle plays a large part in our activities at this year’s IBC. Here are some fun facts about the Cube and why we think it is an excellent metaphor for the current television landscape.

In 1974, Hungarian sculptor and professor of architecture Ernő Rubik first came up with the concept of what he referred to as a ‘Buvos Kocka’, a Magic Cube, as a way of teaching his students how to think about problems in 3D space. It took him over a month to learn how to solve it.

44 years later, visitors to our Stand 1.A51 at this year’s IBC will see a representation of the Cube hanging above it and be able to join in a Daily Cube Challenge at 5 pm. It’s fun and it’s meant to be so, but it also makes a serious point for TV business. The current television market presents many puzzles and challenges which are difficult to solve. You can spend a long time researching solutions and how to make things work, trying to work things out step by step and making many errors on the way.

Or you can come and partner with a company that already has done the research for you and can show you exactly how to arrive at a completed Cube in less time, with less effort, and at far less expense. That is VO: We give you the solution that works (and below we’ll guide you to a solution as to how to solve the Cube itself).

The Rubik’s Cube as it was eventually named, went on sale in 1980 and swiftly become the definitive toy of the decade and, in all probability, the biggest selling puzzle of all time. It has sold hundreds of millions of units since. And while we cannot claim to have been around for as long as it has, we have spent over 20 years solving puzzles like it for our customers.

The first World Championship for Cube solvers was held in the capital of Rubik’s native Hungary, Budapest. The winner was American Minh Thai, who set a record of 22.95 seconds for solving all six faces of the Cube.

‘Speedcubing’ has become an important part of the whole scene. The initial production models of the Cube were half the weight of Rubik’s initial prototype and they have become lighter over the years with smoother mechanisms to aid in producing faster and faster times. The current SpeedCube model features lubricated tracks, chamfered edges, and solid tiles, meaning you can’t simply peel the stickers off and reapply them and pretend you’ve solved it anymore.

Current World Championship title holder is Max Park, who set his record time of 6.85 seconds in Paris last year. All-time world record holder is Australian Feliks Zemdegs, who set a time of 4.22 seconds earlier this year. Have a look below.

There are many different records, including solving it blindfold and solving it with the feet (16.96 seconds if you must know). One of the most incredible feats of ‘Cubism’ we came across in our research in the run up to IBC2018, however, was this performance by Que Jianjyu on Zhejiang TV's show, iDream in China, who solved three Cubes simultaneously while juggling them.

Yes, while juggling them. The fact that it can be done at all is extraordinary. The fact that he then did it in 5 minutes 6.61 seconds in a TV studio is slightly mind-blowing.

Rubik’s Cube - How to Solve It

At 5pm every day on our stand at IBC we’re running a Rubik’s Cube challenge, so if you haven’t yet learned one of the many methods out there showing you how to solve the Cube, now’s your chance.

Happily, the list of published ways to solve the Cube is almost as long as the history of the Cube itself. Indeed, one of the first, ‘You Can Do The Cube’, was written by 12-year old schoolboy Patrick Bossert, and sold around 1.5 million copies when it was released in 1981.

Like most of them it takes a layered approach, where first one layer is solved (by convention this has become the white face) followed by the completion of the middle layer and finally the yellow side.

There have been quite a few different solutions developed along these lines since, all of which should see the Cube being solved in under 100 moves. With practice, and as long as you don’t get some of the more ‘unlucky’ original configurations to start with, the Cube can reliably be solved in under a minute.

100 moves or so, however, is not suitable for speed-cubing (nor probably for juggling, now you mention it) so new solutions have been developed. One of the most popular, the CFOP method, was devised by Czech electoral engineering professor, Jessica Fridrich in 1997 and is used by most of the current speed cubers. CFOP users solve an initial ‘cross' on the first layer, and complete the next two layers simultaneously before turning their attention to the last one. Its upside is that it gets the average number of moves to solve a cube down to 55; its downside is that it consists of around 120 different algorithms to learn.

There are other methods too, such as the Petrus System and Roux Method, which solve the Cube in blocks rather than layers. And using some significant computer power, researchers have found that the shortest number of moves to solve a Cube — the so-called God’s Number — is 20.

The Cube disappeared largely from public life after its early 80s heyday, only to reappear in the early part of the 21st century as part of a wider embracing of geek culture. It’s still evolving as well too, with products like the recently crowdfunded GoCube adding embedded sensors, lights, and Bluetooth connections to companion Apps.

When it first appeared, it was billed as the puzzle that couldn’t be solved. 38 years on there are many different ways to solve it, but one thing has remained consistent: solving it yourself, from scratch, remains an arduous task, especially when there are probably already more elegant solutions already out there that will help you to complete the puzzle in less moves and in less time.

In that way, it really is a perfect metaphor for the current broadcast industry. Want to solve the puzzle? Talk to us.