The Net Neutrality Vote and its Implications for OTT and Beyond 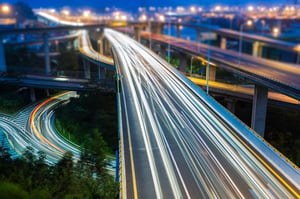 Following the recent Net Neutrality vote, are OTT providers facing having to deal with a two-speed internet?

For a long time it seemed that Net Neutrality, the concept that Internet Service Providers (ISPs) must treat all web traffic data on the internet as equal, was a done deal. And then Donald Trump got elected as the 45th President of the USA and there was a Net Neutrality vote again.

If that sounds like a political statement, it is. It is very hard to separate politics and the US political landscape in particular, from discussions about Net Neutrality, as some deeply entrenched positions have formed along chiefly bi-partisan lines. Indeed on December 14th, when the Republican-led Federal Communications Commission voted to repeal the Obama-era net neutrality protections, they voted 3-2 exactly along the Republican/Democrat division.

The consequences of that act are still being worked through and an appeal was swiftly lodged. But it is worth looking at the whole subject in its entirety to grasp what is really going on and the impacts it might have on OTT, SVOD and elsewhere. And that starts with a brief look at the history of the debate.

Net Neutrality: How we got here

We first wrote about Net Neutrality in June 2014 when we charted the threat its disappearance presented to OTT business models. A simple summation of the situation at the time is as follows:

Obviously for TV service providers offering OTT services the idea of a two-speed internet was an unwelcome one. It was also a fairly significant changing of the landscape following an extensive period of investment in the technology. It also brought home sharply the contrast between operating in a regulated broadcast environment where their interests were one of the major factors in any decision making process and using the wider internet where there were many more forces at play.

The threat of the end of net neutrality chimed with the wider tech community and the public as well. In response to FCC chairman Tom Wheeler’s suggestion that the FCC would consider allowing ISPs to sell what became known as ‘fast lanes’ to guarantee access to high-bandwidth usages such as video, nearly 4 million public comments were made to the organization.

People were also galvanized by images such as the one below, which campaigners used effectively to illustrate how future ISP bills under a non-neutral net would more resemble a cable company model with different users paying different amounts for different types of access. 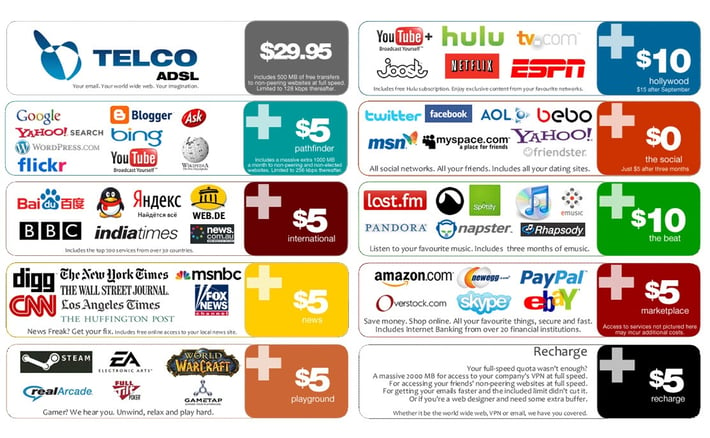 The upshot of all the campaigning was that in February 2015, under Chairman Tom Wheeler, the FCC said that it would use its Title II authority to implement and enforce open internet protections. Wheeler also extended this further than any campaigners could have hoped for at the time.

“Using this authority, I am submitting to my colleagues the strongest open internet protections ever proposed by the FCC,” he wrote in a statement announcing everything to Wired. “These enforceable, bright-line rules will ban paid prioritization, and the blocking and throttling of lawful content and services. I propose to fully apply—for the first time ever—those bright-line rules to mobile broadband. My proposal assures the rights of internet users to go where they want, when they want, and the rights of innovators to introduce new products without asking anyone’s permission.”

Wheeler’s proposals were voted in 3-2 by the 3 Democrats and 2 Republicans on the Commission.

The Trump Administration and the Net Neutrality Vote

Of course, the amount of video that the ISPs of the US and elsewhere have to deal with is still on the rise, with the latest Cisco Visual Networking Index stating that the world will reach three trillion internet video minutes a month by 2021 — or one million video minutes every second, if you prefer — and that video will account for 82% of all web data by the same timeframe.

The figures are genuinely astonishing. Video accounted for 0.876 zettabytes of traffic in 2016. By 2021 the forecast is that that figure will be up to 2.706 zettabytes: 3x the current rate.

Unfortunately, it was not too much surprise when the newly appointed FCC Commissioner, Ajit Pai, began the process of rolling back the status of the neutral net. The new FCC wanted to reclassify ISPs under Title I as an information service and thus not subject to any rules about providing common and uniform access to US citizens.

Time and time again Pai surfaced in the media referring to the previous FCC’s actions as heavy-handed, and there was more of a sense of ideology rather than hard fact in his assertions, especially when rebutting several net neutrality ‘myths’.

MYTH: This will result in “fast lanes” and “slow lanes” on the Internet that will worsen consumers’ online experience.

FACT: Restoring Internet freedom will lead to better, faster, and cheaper broadband for consumers and give startups that need priority access (such as telehealth applications) the chance to offer new services to consumers.

Despite months of vociferous campaigning once more, the Restoring Internet Freedom Order was voted into being on December 14th. In a statement the FCC said it had “voted to restore the longstanding, bipartisan light-touch regulatory framework that has fostered rapid Internet growth, openness, and freedom for nearly 20 years.”

The FCC can only regulate the internet in the USA. And while no country can claim ownership of the internet, the US has for a long time retained a de facto position of leadership and, in particular, has championed a free and open internet.

This is in stark contrast to, say China, where, as CNN points out: “Many of the issues that U.S. net neutrality rules were designed to prevent -- slowing down internet traffic, fast lanes for certain kinds of content, the blocking of websites -- have been happening in China for years.”

So, while the vote will not eliminate net neutrality around the world, it sends a bad signal. And while it is hard, but not impossible, to see the end of net neutrality spreading to other areas with fully developed infrastructures and the concept enshrined in the statue books, such as Europe, the feeling is that developing territories could be exposed.

This is particularly worrying in areas where the OTT industry is set for rapid expansion over the coming handful of years, such as the MENA and APAC regions. Will we see pressure to establish a two-speed internet in these areas over coming years?

Indian authorities have already rebuffed the efforts of Facebook to set up one of the highest profile ‘zero-rating’ services to date, the social media giant’s Free Basics service providing access to Facebook (obviously) and a range of other services such as Wikipedia and AccuWeather at no cost. While perhaps altruistic at first glance, critics argued that it was aligned far too closely with Facebook’s own commercial interests to go ahead.

“What Facebook wants is our less fortunate brothers and sisters should be able to poke each other and play Candy Crush, but not be able to look up a fact on Google, or learn something on Khan Academy or sell their produce on a commodity market or even search for a job on Naukri,” he wrote.

“It's imperialism and the East India Company all over again. Under the lie of "digital equality”.”

The Net Neutrality Vote: Moving On

So, what happens next?

First there are legal challenges to be mounted. The strategies behind these are as yet unclear but, seeing that new neutrality is supported by some of the biggest names in the business — Google and Facebook both registered their disappointment in the new ruling, while Netflix said in a tweet “Netflix supports strong #NetNeutrality. We oppose the FCC's proposal to roll back these core protections.” — expect some well-funded legal talent to be undertaking them.

Then there are the ways that the carriers themselves may react. While nobody expects an immediate start to overt throttling, there are plenty of suspect behaviors that are now legally acceptable. In 2014 Netflix found itself paying both Comcast and Verizon for direct access through the carrier’s network to allow for improved streaming, while in 2012 AT&T tried to block FaceTime on its network. A quick poll of the USA’s leading carriers by The Verge on their attitudes to throttling and paid prioritization doesn’t give too many assurances.

As part of the Restoring Internet Freedom Order, the FCC also promised what it termed robust transparency requirements that it said would empower consumers to choose between providers. How effective these will be will remain to be seen, especially as a new regulatory framework involves the Federal Trade Commission as well in a joint-enforcing role. The problem is that consumer choice in the US is often not what it should be as the US has failed to unbundle the local loop. The upshot is that locally there are many monopolies, and on a national scale the choice tends to narrow to one between two providers as speeds increase.

Congress of course, could conceivably take action, but it only has 60 days to act and, even then, President Trump can veto any simple majority below two-thirds.

For OTT providers these are worrying times. Perhaps the only succor is that OTT itself has become a big enough industry since 2014 that it can be considered a major player up there with the carriers themselves. If Netflix’s or Amazon’s video quality looks bad, then — and especially after all the publicity stirred up over the issue — the consumers are going to start asking very pointed questions of their carriers. Given the lack of meaningful local level ISP competition in the US though, what they will be able to do about it, apart from wait for a new administration and the whole thing to start cycling through again, is unknown.