It was perhaps only a matter of time, but a new survey says that, if asked to choose between SVOD and traditional Pay TV, the majority of under 34 year-olds will opt for OTT. As SVOD numbers grow so too do the services’ popularity.  Netflix’s latest numbers suggest that it has broken through the magic 100 million barrier alone, thanks to an accelerating uptake overseas.The Diffusion Group (TDG) has conducted its annual Benchmarking the Connected Consumer study for seven years now. Its  latest report says that SVOD is approaching ‘perceptual parity’ (ie is considered on a par) with Pay TV amongst dual service users.

Four out of ten users in a survey of 2015 adult US broadband users said that they would opt for OTT TV service over Pay TV if they had to make a choice. What’s more, as the TDG table below illustrates, those values flex noticeably with age with Millennials and younger actually preferring SVOD. 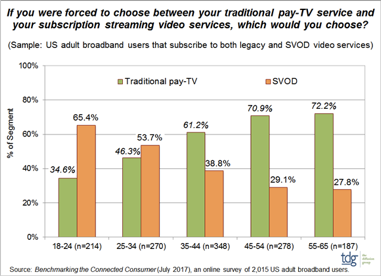 TDG president, Michael Greeson's, analysis is interesting, and suggests that the spirit of cord-cutting lies over this sector of the industry too in that traditional MVPDs face the growing threat that today's legacy+SVOD users could very well be tomorrow’s vMPVD subscriber.

“Unlike legacy providers that also offer a vMPVD service like Sling TV or Dish, pure-play broadband TV operators have no conflict of interest in transitioning SVOD users to multi-channel subscribers. The new revenue will be accretive to ARPU, not dilutive, as the linear package also includes the SVOD service. Cannibalization is thus not a concern for virtual operators.”

What will undoubtedly help companies in targeting audiences is an understanding of exactly who they are. As the diverse content available on the likes of Netflix and Amazon shows, there is a range of viewership out there, and TDG has been active in research in that field recently too. As a result the company’s A Formal Segmentation of US SVOD Users reckons it can subdivide the audience in the US at least into four main categories.

Pay-TV Substituters are currently a small segment, around 10%, but this is growing. They spend a massive 68% of their TV time watching SVOD, about 25 hours per week as part of a media mix that also sees them watching more TV in general (about 34 hours/week).

Pay-TV Supplementers only watch about 3.5 hours per week of SVOD content, about 20% of their time, and watch the least TV of all four groups; about 14 hours per week (the disparity in figures here is presumably accounted for by non-television uses of the screen, such as gaming). This is, at the moment, the largest group of viewers.

Quantum Viewers watch in the region of 5 hours of SVOD per week, which amounts to 26% of their total viewing time, and watch on a multiplicity of devices. Essentially they like video and aren’t bothered too much where it comes from. Meanwhile, the contribution that those five hours makes to Video Luddites’ viewing rises to 35%. These viewers make up about 33% of the audience and simply don't watch much TV on any platform.

Due to this fragmentation, operators looking to engage with these markets will have to target their content very carefully. They will need to offer a personalized OTT TV service that starts with data-driven analysis and then drills down into detail that is, in Greeson’s words “not tracked by industry metrics.”

Or not yet anyway.

To find out how you can start that journey with VO’s powerful TV business analytics, click here.