8K vs 4K? Why UHD is gaining powerful momentum

Once so far advanced that it almost seemed like science fiction, the first 8K TV service has been launched in Japan and more will follow.

Either way, protecting premium content from the pirates will be a must. One of the key events in the broadcast industry in 2018 was the establishment of 4K HDR as the new baseline for major global sporting events.

For the first time, every match at the FIFA World Cup in Russia was captured in the format and made available as part of the World Feed. And while many of the rights holders of the event didn’t have a 4K broadcast channel available to them, nevertheless it set a precedent. It is now hard to imagine any major event being available ‘only’ in HD.

We will now look at the growing momentum behind 4K, or Ultra HD as it is sometimes referred to (there are differences, but functionally the two terms are interchangeable). We will also look further ahead at the successor to 4K, 8K. One of the key takeaways is that 8K is perhaps not as far away as you might think.

First we have to acknowledge that a good proportion of the world’s viewing is still in SD, never mind HD. Nevertheless there is a transition occurring, with the richer economies moving forward now from HD to 4K and the rest of the world following in its wake. Futuresource estimates that there will be over 100 million 4K TV shipments in 2018 (it takes a few months after the end of the year to compile the exact figure). China is the largest single market, but North America is not far behind and Europe is projected to see a 30% increase in this year alone.

Globally, double-digit CAGR is expected for 4K shipments throughout the forecasting period to 2022. 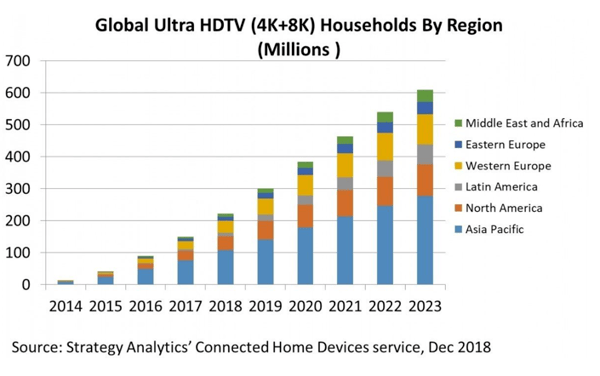 One of the most interesting things about this move to 4K is not so much the sheer numbers as the accelerated rate of change. According to figures from the Consumer Technology Association in the US, by Year 4 of the transition to 4K (2017) 15 million 4K sets had been sold. In contrast, by Year 4 of the HD rollout, only 2.9 million units had: five times less.

So, why is the move towards 4K happening five times faster than the move to HD? A big part of the answer is content.

Netflix is probably the single biggest differentiator. It was one of the earliest adopters of 4K, seeking to use it as a USP over its rivals. The extent it did this was impressive ― House of Cards was shot and released in the format in May 2014, while the first Ultra HD Blu-ray player wasn’t launched until February 2016. It also standardized 4K production before any of its rivals. Partly as a consequence, Parks Associates estimates that 30% of Netflix subscribers are in the 4K-capable Premium Tier.

Other broadcasters have since managed to leap the technological barriers to 4K. Both cable and satellite solutions are now on the market. By the end of 2017, the Ultra HD Forum estimated that there were 70 unique 4K TV channels in operation around the world. It projects that in under two years, by the end of 2020, that figure will have more than trebled to 250+.

Whether the rollout of 8K will be as fast is unknown: the 7640 x 4320 picture and accompanying 22.2 sound still represent significant technical challenges, not least in terms of compression and bandwidth. But a significant milestone has already been passed with the December 1st 2018 launch of BS8K by NHK in Japan. The channel plays a rotating carousel of 12 hours of content a day, with expansion planned.

NHK has been the prime mover behind the format. Initially calling it Super Hi-Vision, it demonstrated it for the first time at IBC2006 and in 2008 showed the first ever international 8K live transmission. It has long insisted that the Tokyo 2020 Olympics would be available in Japan in the format and looks to be well on course for making good on that promise.

Viewers will have an increasing number of options to watch the Games on too. The first consumer sets appeared at CES 2018. More launched at IFA in Berlin later in the year, and were available in the shops not long afterwards. What was surprising was how low the price point was. A 65-inch Samsung 8K TV set had a launch price of $4999.

Of course, this is still expensive. But if you measure it against the 4K sets from roughly the same point in the 4K launch, they are half the price. Also the price of 4K sets then fell by a third over the following two years.

It is a big if, however. There are hurdles to overcome and the issues surrounding any speedy transition to 8K fall into two camps.

Producing it is still difficult. While most of the big name system camera manufacturers have developed 8K models, elsewhere the small market is dominated by RED and the body alone of its entry level unit costs $20,000. Even NHK currently only has three edit suites and two recording studios in operation and there are only a handful of 8K-capable OB vehicles in operation.

This will increase, of course, but it is difficult to see how that content will get to the viewer. Broadband networks will struggle to cope with the required bandwidth. SVOD players are immersed in competition and they are unlikely to want to scale up for a new and untried format in the near term. Netflix is not going to go 8K at any point soon.

This is a key point: 8K is untried. Even if it eventually becomes a de facto production format, its impact in the home is uncertain. Designed from the outset for small Japanese rooms, the extremely large screens required to provide, say, the North American or European market with the same sense of immersion may be prohibitive. There is also potential for motion sickness.

Given the jump in picture quality from HD to 4K HDR, it is unclear whether viewers will want to spend the additional money to transition early, at least outside Japan. And if it is to be part of the normal TV set upgrade cycle then it will follow four to five years after the jump to 4K.

The point is that if 8K TV is coming, even in five years’ time, so is 8K TV piracy. The lesson of 4K is that pirates are happy to concentrate resources on premium content as that nets them a premium income in turn. AACS2 encryption, which was meant to prevent the ripping of Ultra HD Blu-ray discs was breached within six months; AACS2.1 encryption, which debuted over the summer, lasted only one month.

Anyone involved in the distribution of premium content, in the HD and increasingly 4K present and on to the 8K future, needs to be taking steps to protect it. As yet there is little 8K material available and fewer places to see it, but preparedness is important. The speed of technological change can still surprise. Four years after the first 8K live international transmission at IBC, influential industry figures were suggesting that 4K was not going to be a mass market proposition within twenty years, until 2032. They were out by almost 15 years.

By the time Tokyo 2020 starts, 4K will be the baseline international standard for all such global live events. But by then we may even be looking ahead to Paris 2024 and making further substantial, international plans for 8K transmission. As yet, the exact inflection point is uncertain. Whatever happens though, and in whatever format viewers round the world are watching, 4K or 8K, that premium content will need to be protected.

Hagit is a Director of Orange Accounts, with over 15 years experience as a Customer Delivery Director for T1 Customers worldwide in the TV domain. In the past 10 years she has overseen the deployment of many Orange Group customers in Europe.