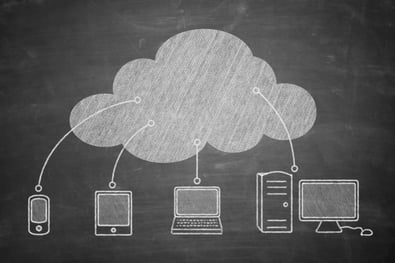 From 2008 Netflix has been utilizing horizontally scalable, distributed systems in the cloud. As of January 2016 it became a truly a cloud-native company.

This has been an important factor in its evolution into a global TV network. Others in the media industry are following suit, although at a much slower pace. The cloud attracts TV service providers and operators by enabling a move from a CAPEX to an OPEX model. Additional benefits include increased speed of setup, reduced time to value; the agility to adapt to rapidly changing consumer demands, and enhanced reliability and scalability.

This is reflected by growth in the cloud in general, which in some sectors is spectacular. International Data Corporation’s Worldwide Semiannual Public Cloud Services Tracker reports a growth in the worldwide public cloud services market of 28.6% year-over-year for the first half of 2017, with revenues hitting $63.2 billion.

In the broadcast industry, cloud adoption continues to rise. About 85% of buyers plan to deploy cloud technology in the next three years, according to a recent IABM survey. In particular, content hosting and delivery over IP is migrating to the AWS, Microsoft and other webscale service providers. Responding to market dynamics on workflow, formats, cost and customer demand, content is also finding its way to the cloud for virtualized production and distribution.

What are the specific advantages of Cloud TV Streaming for TV service providers?

One of the biggest benefits of Cloud TV streaming is how it is responsive to changes in market demands. As most, if not all of a cloud platform has been virtualized, adding new features is possible at a much faster pace than with legacy technologies.

Cloud platforms, especially cloud native platforms are often designed and developed with a modular approach. One approach utilizes microservices architecture, and builds the platform in smaller independent services. Each new service or feature can then be released independently, instead of waiting for a full release of all the new services at once.

Another enabler of ongoing delivery is the DevOps methodology, in which developers and operational teams are merged into a single team across the entire application lifecycle, from development and test to deployment to operations. By reducing the design-develop-test-release cycle into one of continuous releases, DevOps allows ongoing delivery.

Since these service providers no longer have to wait for the next big release, but instead can incorporate various elements into their TV platform an ongoing basis, they can meet market demands earlier, and at times get a step ahead of their competitors who are tied to older technology and processes.

TV services traditionally required a substantial investment in infrastructure, which narrowed the field for anyone considering launching TV services, from all stages of content production through delivery. While the cloud cannot overcome all aspects of costly production and delivery, it can assist in most areas.

Cloud TV variations include fully-hosted and managed models, like VO’s TVaaS which requires no in-house infrastructure. In this case, service providers can move from CAPEX to OPEX business models. However, service providers who have invested in extensive hardware may choose to retain these systems while gradually incorporating cloud services. This allows them to take advantage of the cloud’s scalability and elasticity without ditching their current operations. In this case, models that allow hybrid configurations, which integrate on premise and cloud systems, are required.

However, some service providers have found that customers have expectations that no CAPEX means ‘free’ and are not prepared to pay for various functionality in the cloud services. As additional, increasingly complex services are available on the cloud it likely that they will entail additional costs, therefore customers will have to get used to paying for them.

The case for TV business analytics in the broadcast industry is now established, as the importance of leveraging big data is understood at all levels of the industry. Tight integration of analytics with a Cloud TV platform provides 360-degree visibility into channels’ performance, helps optimize content acquisition, reduces churn, and enhances the viewer experience.

Big data of its own has no value - what service providers require are the actionable insights that can be implemented to improve services and personalization. The cloud provides the ability to process large scale data sets, utilizing additional resources that may not be available on premise, offering faster results for real-time and historical results.

The cloud can pull in information from a number of sources more efficiently, partially due to the fact that more and more data is now stored on the cloud. This does not mean that all this data is stored on a single cloud, making it super-simple to access. However, as more and more data is collected and stored within clouds, including the Cloud TV streaming platforms, efficiency will continue to climb. Reducing latency during processing is enhanced by deploying direct interconnections between data and analytics in the cloud.

Media operations performed in the cloud include routing, CDN, caching, CPU, memory, Pay-TV metadata and security. Benefits of performing these operations in the cloud include automation and orchestration of workflows, which improves efficiency and enables scaling. And, instead of in-house IT performing frequent upgrades, migrations, redesigns and other ongoing maintenance, offloading the infrastructure means that all these operations are now the responsibility of the cloud provider.

Uploading content and conducting other resource intensive operations can now occur during off-hours in various global locations.  This optimizes processing power and licenses throughout different time zones. Shifting from costly permanent licenses that are often under-utilized, to licensing that is based on usage is still evolving in the media sector, but expected to grow.

On the downside, the risk of placing all resources and operations in the cloud becomes evident when outages occur, for example AWS S3 was out of service for six hours last year. While these incidents are rare, they do indicate the need for instituting best practices. These can be using more than one cloud provider or other types of hybrid configurations, in the same way that not all critical material can be stored in the same on premise data center.

Not that long ago the cloud was viewed as less secure, yet reported data breaches against cloud-based analytics services have been much lower than on-premises systems. When the data is shared over direct and secure interconnection, which bypasses the public internet, a breach is even less likely.

Protecting content in cloud environments requires robust multi-DRM technologies to safeguard the content when it is distributed to multiple consumers on multiple devices in addition to strong anti-piracy protection measures. Migrating to the cloud often involves shifting from card-based to cardless security solutions.

Viewership can vary greatly, with peaks and troughs, and then surge with a sports event. Handling these bursts was a challenge with legacy infrastructure, but here the cloud provides a distinct advantage, being able to expand for the event and scaling back once the event is over.

Even without major sports events, regular viewing patterns do fluctuate; TV services must grow and shrink on demand. The cloud allows this expansion and contraction without requiring maintenance of large capacity buffers. It eliminates the high cost of over-provisioning IT infrastructure for peak consumption. Instead, payment can be based on a cloud usage pricing model, only requiring payment for consumption rendered.

Companies such as Discovery are using the cloud for their global operations that supports about 12,000 hours of programming per year, with over 50,000 deliverables of programs and other elements, totaling over 600TB of media uploaded through the system.

As noted by Josh Derby, VP Technology Development & Strategy, they are utilizing an automated test battery in the cloud to test incoming files, and increasingly automate the process to repair or reject messed-up files. As more machine learning tools become available to the TV industry the potential for further improvements looks promising.

The Future for Cloud TV Streaming

What does the future hold? Tim Bertioli, VP of  International Operations at Vice Media sees future benefits such as cost effective OTT playout, the ability to leverage future broadcast automation and machine learning to create efficiencies.

The cloud enables easier integration of OTT offerings with traditional service delivery and also provides more consistent video experience across all platforms; therefore more and more uptake is expected for cloud-based TV platforms. Ensuring that the platform is future-ready is critical, as companies expand globally and incorporate new technologies.