The annual publication of the Gartner Hype Cycle for Emerging Technologies is always a bit of an event in the tech industry. While its oracular nature in uncovering new technologies is sometimes disputed, one of the things that makes it most interesting is how it characterizes established tech that is making its way in the market.

Virtual Reality is a case in point. As you can see from the diagram below, Gartner’s researchers currently place it as edging up what the company refers to as the Slope of Enlightenment, with a timeframe to mainstream adoption of 2 to 5 years.

Augmented Reality, meanwhile, is given a 5 to 10 year horizon and is placed just before the bottom of the Trough of Disillusionment. 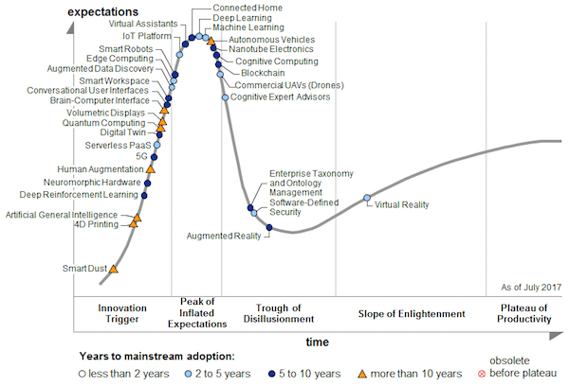 It’s worth breaking down these sections a bit more to see what Gartner thinks is going on. The Trough of Disillusionment starts not long after negative press begins about a technology and cycles through the following stages:

And from here it transitions onto the Slope.

The Slope meanwhile is less complex, seeing the development first of methodologies and best practices, before a third generation of more fully-realized and sophisticated products drive a transition to the fabled Plateau of Productivity.

Virtual Reality’s journey across approximately 3cm of screen real estate has been a slow but steady one. It first appeared on the chart in 2013 at the same rough position AR holds now. This highlights how disparate research into the topic had been, before it started coming together under the single heading of VR.

Indeed, the biggest change in status has come this year, with the icon switching from 5-10 years away from mainstream adoption to 2 to 5.

Augmented Reality, meanwhile, first appeared on the Hype Cycle in 2005; transitioned the Peak of Inflated Expectations in 2009/10, and is currently sliding around the bottom of the trough with a 5-10 years to adoption tag.

And if that seems harsh, technologies can accelerate fast and take even experience research organizations unawares. Internet TV is the most famous example, passing across the Peak between 2010 and 2012 and then disappearing off the chart all together, as mass market adoption accelerated beyond the chart’s ability to keep up.

Gartner identifies three mega trends from its research, covering over 2000 newly emerging technologies, all of which could have a bearing on the broadcast industry.

First is the emergence of Artificial Intelligence, which it says will be the most disruptive class of technologies to impact over the next decade. Next are Transparently Immersive Experiences, where we find VR and AR, and last is a shift from compartmentalized technical infrastructure to 7 ecosystem-enabling Digital Platforms.

The meta theme of the mega trends is that the gulf between technology and humanity is being steadily bridged. ‘Human-centric’ is a term that crops up frequently, as technology — partly driven by increasingly powerful AI — looks to become more adaptive and contextual.

"When we view these themes together, we can see how the human-centric enabling technologies within transparently immersive experiences — such as smart workspace, connected home, augmented reality, virtual reality and the growing brain-computer interface — are becoming the edge technologies that are pulling the other trends along the Hype Cycle," said Mike J Walker, research director at Gartner.

We already know how profoundly Internet TV has reshaped the broadcast industry as it’s whizzed round the hype cycle and beyond it. VR and AR may herald a similar disruption on the way. 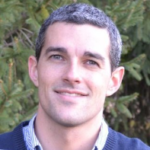