NAB 2022 was the first major trade show for many for over two years and an award-winning and successful one for VO. Here’s what we experienced. 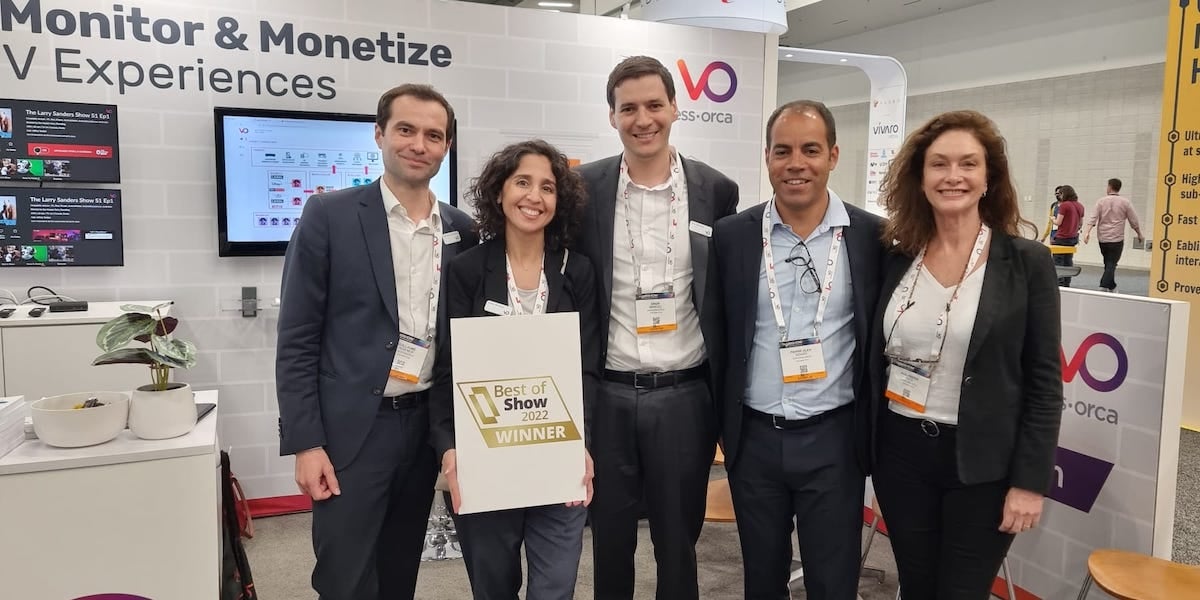 After the disappointment of the last-minute cancellation of last year’s NAB, it wasn’t until we arrived in the new Las Vegas Convention Center’s West Hall that we really believed that this year’s show was going to happen. Then, of course, started the hard work of putting the booth together, which always takes longer than you expect but is also always completed on time before the show floor opens.

And as soon as it was open it was obvious that there was a real buzz around the show.  The previous last NAB took place pre-pandemic three years before, in 2019, and after several years of virtual calls there was a real desire to get back to in-person meetings once more. Diaries were filled, demos were booked, and we had a constant stream of visitors to the stand, with particularly strong interest from Latin American operators looking to both establish new services and safeguard the revenue streams of existing ones with our anti-piracy services.

That said, the show was more international than many people had assumed it would be, and we welcomed visitors and media interest from around the world, with a particularly strong number of European visitors. We were also very happy to contribute to the conversations surrounding key industry issues, getting involved with the various discussions and debates at venues dotted around the LVCC.

We won two major awards too. These were great honours and fantastic validations of our technology and the roadmap we are following to unlock new functionalities for our customers.

Read on to find out more of what we did and announced in Vegas. After all, what happens in Vegas can’t realistically stay in Vegas if it involves 50,000 visitors from around the world.

So, before the show even started we had some major news to share which was that we were integrating VO applications with Google Cloud Anthos.

You can read more about it here, but a brief summary is that Anthos unifies the management of infrastructure and applications across on-premises, edge, and in multiple public clouds with a Google Cloud-backed control plane for consistent operation at scale. Running VO solutions on Anthos will accelerate the TV and video industry’s transition to cloud-native deployments, while also allowing for the continued use of on-prem equipment, and brings multiple benefits to TV and video service providers. These include automatic scalability, ease of deployment, and increased operational efficiency.

It was a pretty major announcement and something that was a big topic of conversation on our booth throughout the show. Footfall was generally good despite the lower number of attendees post-pandemic, with Monday in particular being an astonishingly busy day.

As we mentioned, we won two awards at the show as well, which we were absolutely delighted with and reflects all the hard work that people across the company have put in to refining and further developing our technology since the last NAB took place.

Our Secure Video Player with Advanced Features won one of the NAB 2022 Best of Show Awards from TVB Europe and its sister titles. The VO multi-platform player now supports watch party, multiview, virtual reality and smart caching, empowering operators to boost viewer engagement and subscriptions. Operators like it and the judging panel seemed to as well.

The Secure Player also garnered an official award from NAB itself as one of the show’s Products of the Year. “The NAB Product of the Year Awards honor innovative breakthroughs that will change the way the media and entertainment industry creates, connects and capitalizes content,” said NAB EVP of Global Connections and Events, Chris Brown.

This is very much what the Secure Player was developed to do, so we were delighted that NAB’s verdict on it so closely chimes with its goals and ambitions.

This year in keeping with the hybrid show format that has been developed since the pandemic started, there was more video available from the show after the event than ever. We’ve dropped the excellent Connected Media IP interview with our CEO, Philippe Léonetti, inline below. It’s a succinct seven minutes in which he discusses the current status of our business, the challenges it (and all of us) face, our future plans, and how we are moving to  a model where we offer End-to-End services to our customers.

There’s plenty more to see on our dedicated YouTube channel as well, from Kitplus TV interviews with Philippe and our VP Security Products, Pierre-Alexandre Bidard, to Dror Mangel’s keynote presentation on The Pillars for a Successful TV Advertising Business and our contributions to the debate on launching International TV services. In fact, including Guillaume Lossois’ examination on ‘How to Capitalize on Next-Gen Targeted Advertising With AI & Analytics’, we had three high profile speaking ops across the NAB conference strands and we hope to look at them in detail in future blog posts.

For those that couldn’t make it to NAB, it’s all good viewing and gets across a small sense of what a whirlwind handful of days in Vegas was like.

Back in-person next at…

NAB was the first trade show for a long time for many of us in the industry. It is being quickly followed by more though, both small regional events and some of the larger shows on the industry circuit; some of them in strange places on the calendar as the industry slowly gets back to its normal rhythms after the pandemic.

In quick order then we have CABSAT coming up in Dubai and BroadcastAsia taking place at Asia Tech X Singapore, both major shows covering significant markets and which can have a reach far beyond their geography. Check out our Events page to find out where we’re going to be next and book a meeting or a demo with us in what is set to be a busy year for shows of all sizes. See you out on the road!