Blockchain, Bitcoin, and Their Effects on The Video Industry

Publicized by the financial rollercoaster of Bitcoin, blockchain technology has become the tech buzzword of 2018. How will it affect video?

This is the sort of thing that tends to attract mainstream press interest and all of a sudden the subject of cryptocurrencies was everywhere. From the extreme amounts of energy used to mine them to their shadowy use in underworld transactions; from their magical ability to make people suddenly very rich to their equally powerful ability to make them exceedingly poor indeed; from lost hard drives worth millions of dollars to being a major plot point on US sitcom The Big Bang Theory; Bitcoin, Ethereum, Litecoin and their counterparts became part of the global consciousness. And one of the main questions everyone had was ‘How does all this work?’

The answer is via blockchain. And while cryptocurrencies might perhaps ride out the wave of hype and go on to become a vital part of the digital future, they are only part of the story. The blockchain that underpins them is that rarest of technologies: a genuine potential game-changer and disruptor, one whose use has profound implications for the video industry.

At the moment there’s a sense of a gold rush underway with blockchain as investors, desperate not to miss out on the next wave of a new technology, pile in to all things related to it. This is leading to some rather strange stories emerging as a result, such as the one where New York drinks company Long Island Iced Tea announced it was changing its name to Long Blockchain Corp and saw its stock price jump 200% at the opening of trading the next day

What is getting people excited is the way that blockchain-based technologies have the potential to revolutionise many areas of digital commerce and beyond. We’ll get to the specific implications for the video industry a bit further down, but first an explanation of exactly what blockchain is.

Essentially, the elevator pitch is that it’s a way to record transactions in a distributed manner with no centralised authority. In many ways this makes it very similar to a peer-to-peer network such as the ones that power BitTorrent. Basically blockchain fuses two things together, a network and a database, but also has additional rules and some built-in security measures that mean it maintains its own integrity and its own history. There are a number of key characteristics that make blockchain what it is:

Distributed ledger: identical copies of all records are shared between all participants

Put all this together and you have a powerful system for recording transactions and tracking assets through a business network at both low risk and low cost. And, of course, an asset can be anything, from a tangible thing such as a car, to an intangible object such as intellectual property or video content.

One of the counter-intuitive things about all this is that by removing the need for trust it creates trust. Because every transaction builds on the previous one — each block contains a digital fingerprint called a hash, a timestamped batch of recent transactions, and the hash of the preceding block — any errors or deliberate tampering can be quickly detected, particularly as every participant has access to the whole ledger. The concept as a whole is inherently self-policing and, when regulators are involved, they have easier access into the totality of the records than ever before.

IBM’s eBook Blockchain for Dummies provides a good explanation about how all this can simplify business processes using car leasing as an easy and clear example . Under a traditional model, manufacturers, dealers, leasing companies, lessees, and finally scrap merchants all have to keep their own individual records of ownership transfer as a vehicle makes its way through the system. And while all feed their own data to an overseeing regulator who looks after the processes involved, the potential for error and even fraud is high, as are the costs.

A blockchain model sees all these parties become network participants that can see where any vehicle is at any time and, using smart contracts, transfer it between them. Transaction times are thus cut dramatically, as are costs.

Blockchain in the Video Industry

One of the factors driving the current investment hype in blockchain is the knowledge that we are very much only in the foothills of what is to come. The potential is enormous but as yet there are few clear roadmaps to the blockchain future and many of the use cases being sketched out are theoretical.

Nevertheless, they are exceedingly interesting. Broadcast as a whole has become a very process-driven industry over recent years as part of a consequence of the move towards IP technologies, and this is exactly the sort of transaction model that blockchain can transform.

Deloitte’s fascinating report Blockchain @ Media: A New Game Changer for the Media Industry highlights the technology’s potential benefits in the area of payment transactions and copyright tracking in particular. It sees it having a profound impact in providing new pricing options for content, in distributing royalties, in monetising C2C and P2P content sharing, and in its ability to end geoblocking.

It’s worth looking at some of its use cases in a bit more detail as an illustration.

Micro-payment systems offer operators another route to the consumer and, if their pricing is pitched right, have a particular appeal to Millennials. However, current billing systems mean that a large volume of transactions can raise the costs extremely quickly, effectively pricing low-cost content out of the system.

However, a blockchain-based system makes even micro-cent payments cost-effective (indeed, current crypto-currencies already allow fractional cent transactions). It thus opens up monetisation opportunities for a range of perhaps older content on the one hand, while also offering an ad-free alternative to content such as YouTube videos.

There’s a side benefit too in that copyright owners can track the usage of their material far more effectively, and the pain points in the subsequent distribution of royalty payments almost disappear.

This also has potential in the fight against content piracy. Because content owners have full control and visibility of the consumption and number of uses of their content, illegal copying becomes, according to Deloitte, “nearly impossible.” What’s more, it also opens up the potential for wholly new business models to emerge, such as consumers being able to legally share subscription content amongst themselves as the following diagram illustrates. 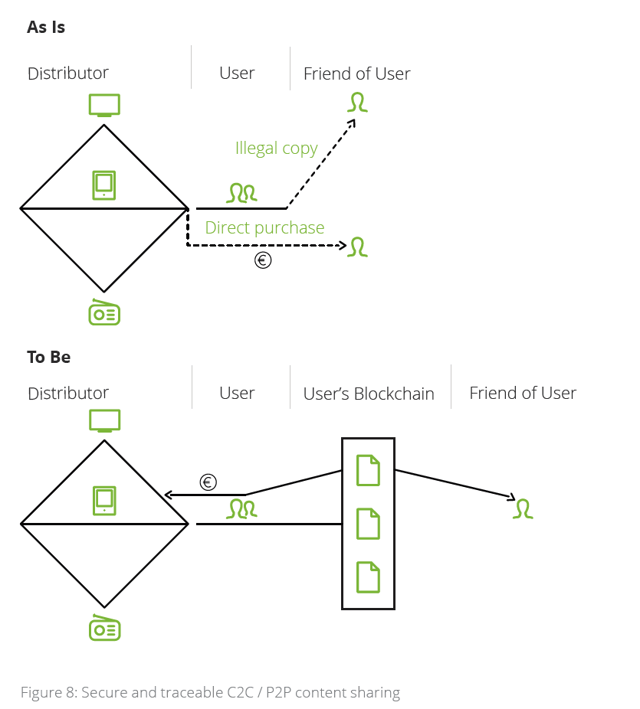 The Disruptive Future of Blockchain and Video

To say there are challenges ahead for the media industry in the face of blockchain deployment is almost an understatement. Blockchain has the potential to be extremely disruptive to many companies. For example, the above C2C scenario, while benefitting consumers and content owners alike, potentially seriously undermines the current business model of many pay-TV operators.

As Deloitte puts it: “Media aggregators will still play a role in the marketing of contents. Nevertheless, we expect the dynamics of the market to change in the long run due to the “democratizing” effect of blockchain. The aggregator role will shift towards curated discovery platforms to find new content and will lose their “gate-keeper” role, as monetization and realtime billing will be available to content owners [directly] via blockchain.”

It’s not hard to see advertising networks also having to reposition themselves too, but for all the disruptive potential of blockchain there are still barriers to overcome. Trust within the wider communities that may look to use blockchain is an issue as it is with any new technologies that involve financial transactions. Related to that is the fact that platforms and standards (not to mention the companies involved) are evolving extremely rapidly in the current climate, which both makes it difficult for businesses to pin down the technology and make informed choices, and presents a barrier to interoperability. This last is important: while blockchain can be used in isolated systems, its true power will come when individual blockchains have a language that means they can talk to each other.

Then there is the issue of usability in everyday environments, though it is not hard to see a blockchain-specific extension of Apple Wallet or similar making the smartphone the main conduit for transactions. The last point is that all this will take a lot of computing power to operate and a lot of storage for the resulting data history, especially if a large number of transactions are going to be handled by a network.

The Economist memorably described blockchain as ‘The great chain of being sure about things’. 2018 will see the tenth anniversary of the publication of the mysterious Satoshi Nakamoto’s paper on Bitcoin that established blockchain technology in the first place. A decade later, the one thing that we can be sure about, is that blockchain and blockchain video will change the industry as the decade progresses.