Viewers are watching more television than ever before but, according to new data, finding what they want to watch is becoming harder too.

Alongside such yearly events as the publication of Mary Meeker’s Internet Trends and the Gartner Emerging Technology Hype Cycle, the Ericsson Consumer Lab’s annual TV & Media Report is becoming one of those interesting yardsticks to measure the industry by.

It’s certainly one of the largest, interviewing 20,000 respondents from 13 countries to pull together its analysis which it says is representative of over 1 billion people.

So, how are those billion people consuming their television in 2017 and how might that change over the next three years? The answers confirm some trends but also highlight others to a perhaps surprising degree.

There are five key insights about viewership in 2017 that we can pull out of the data.

A mix of linear TV, live and on-demand internet services, downloaded and recorded content and even old fashioned-physical media have all resulted in a mushrooming of available content that viewers are happy to soak up. Viewers now watch a record high of 30 hours of TV and video a week.

2. More on-demand is being watched than ever before

From somewhere a little over 30% in 2010 to 42% now, on-demand viewing is growing and growing most amongst a younger demographic. Viewers age 16-19 watch both the most hours of TV per week, 33, and also feature the largest proportion of on-demand viewing at 54%. On-demand viewing falls to 21% in the 60-69 age bracket.

3. Smartphone viewership is on the rise

70% of consumers watch videos on a smartphone, twice the amount that did in 2012, aided by smartphone penetration itself reaching 95%. Meanwhile the ownership of ‘older’ devices has declined, with stand-alone DVRs falling from 80% penetration to 72% and desktop computers — and this is a surprising one — from 60% to 38%.

4. Interest in Virtual Reality is rising

Despite what feels like a slew of negative headlines attached to Virtual Reality in recent months, consumer interest in VR is still very much there. According to Ericsson, 10% of consumers are already using a VR device and over 25% are planning to get one. “VR can be the spark needed to reignite the social TV campfire, and allow today’s VOD viewing to become more of a social activity than it is today – this time in VR,” writes the company, which also notes interest in TV and video providers offering dedicate VR bundles.

The next insight is worth breaking out into a section all of its own.

Inevitably there are age differences in the data. Millennials spend over 50% more time searching on VOD services than those aged 35 and up, 29 minutes a day as opposed to 19, though they also spend over 80% more time watching VOD content as well.

It’s worth reproducing the graphic Ericsson illustrates this with as it highlights the percentage of time spent in search in VOD in particular. 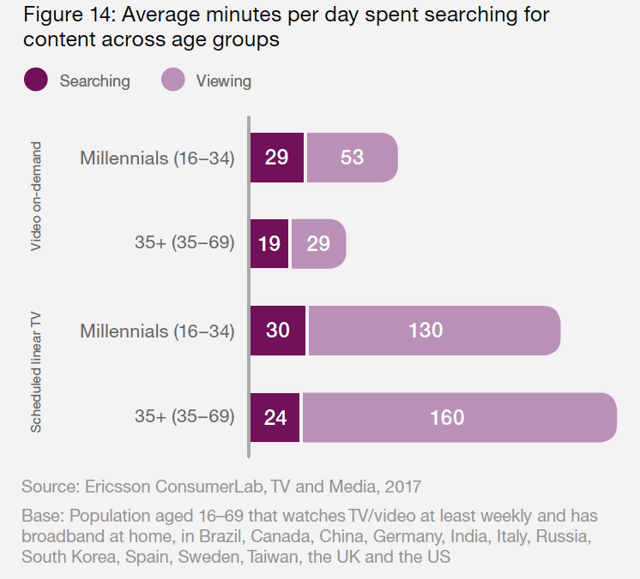 Just over 43% of viewers say they can’t find anything to watch on linear TV on a daily basis, a figure which falls impressively to 23% when it comes to VOD. Interestingly, even when it comes to live content such as sports, one in three sports viewers thinks it takes too much effort to find the sporting events they like on TV.

Indeed, 7 out of 10 consumers want a universal search feature that encompasses all their viewing platforms in one device, with 6 out of 10 saying that content discovery is a key concern when subscribing to a new TV and video service. “Development in this area will drive consumer loyalty and satisfaction,” says Ericsson.

The conclusions of the report suggest that by 2020 we will have reached several important tipping points.

First, viewing will be split 50/50 between on-demand and live. Second, half of all TV and video viewing will be done on a mobile screen. It also estimates that nearly an hour of additional viewing will be put on a week, reaching approximately 31 hours.

As to the viewers themselves, the following table is an interesting insight into how they think their own habits will change over the next few years. 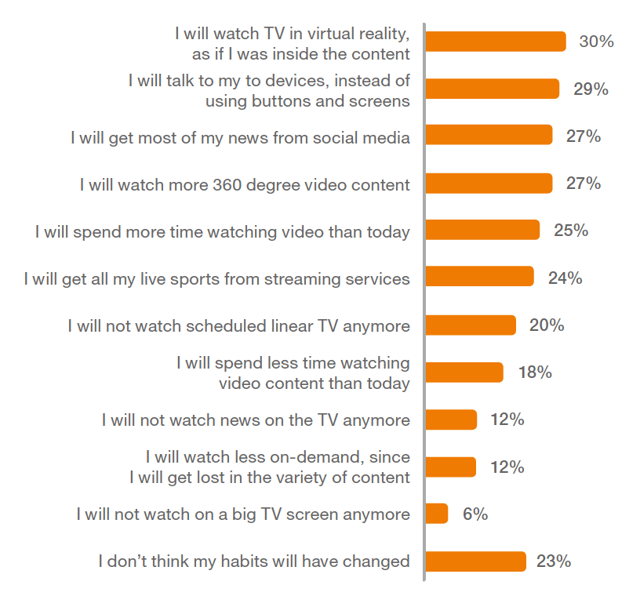 The key takeaway here is perhaps that only 23% think their habits will not have changed at all. Given the amount of new developments coming down the pipe, the continual rise of OTT, and the impact of the content discovery crisis, you can probably even conclude that that number seems a bit high. 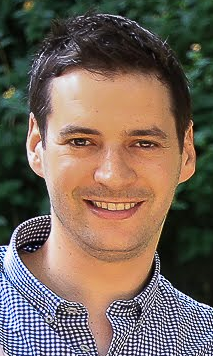 Dror Mangel is a Senior Product Manager, AI & Data Solutions Domain. Prior to joining Viaccess-Orca he gained business development and product management experience from leading startups in Israel’s ‘Start-up Nation’, working with many global Fortune 500 customers. He is an expert in data-driven solution and is driven by data and a passion for creating B2C + B2B products from their early ideation stages to commercial launch, always focusing on the market's needs. He holds a Bs.C. in Industrial Engineering and Management from Technion - Israel Institute of Technology, and is currently working towards an MBA from Tel Aviv University