How the future of streaming is increasingly tied to advertising 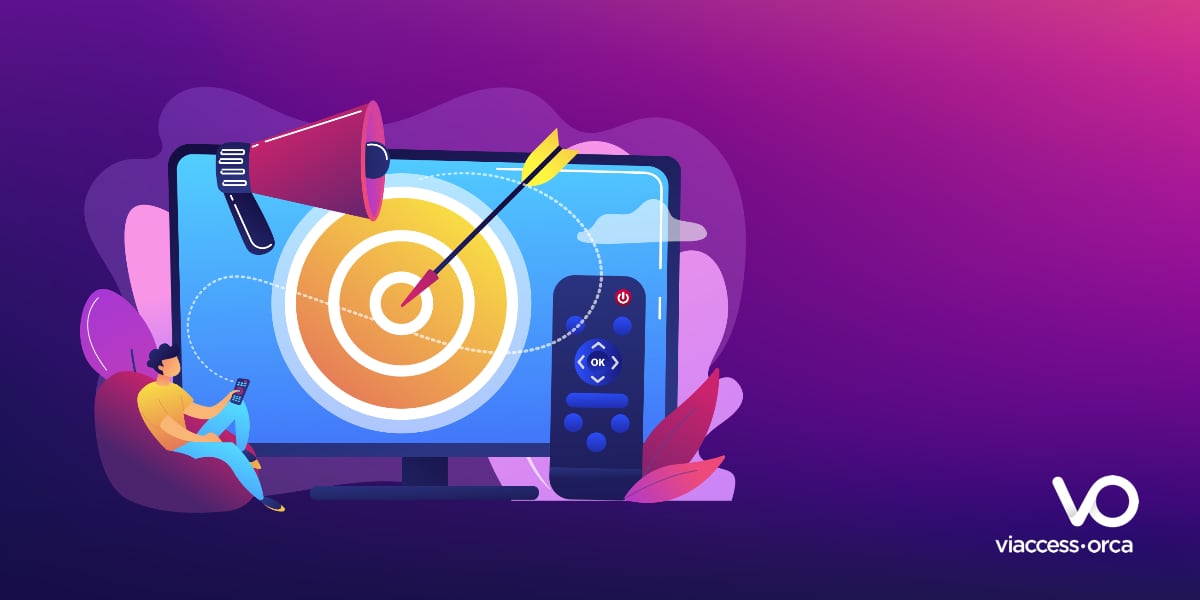 For quite a few years it was widely assumed that SVOD was going to lead to a long-term decline in TV advertising, as viewers flocked to ad-free subscription services. However, that no longer seems to be the case. FAST, Free Ad-Supported TV, is growing at a rate that is eclipsing all other types of streaming services, and there are many signs that viewer antagonism towards advertising seems to be lessening.

Recent Hub Entertainment Research data found over half of viewers say they would choose a platform with ads if it saved them as little as $4-$5. Meanwhile, among those who described themselves as “intolerant” of ads, 30% said they would still choose an ad-supported platform if it saved money.

With spiraling energy costs and fears of a recession looming in consumers’ minds, the importance of an ad-free platform is falling down the list of consumer check boxes. When Hub asked those who had recently signed up for an ad free platform why they subscribed, more mentioned value for money (42%), exclusive shows (41%), and library selection (38%) than the lack of ads (36%).

Content, as ever, was the most important variable. Current shows on AVOD and FAST platforms were seen as just as desirable as those that were available on SVOD.

It’s not just about saving money, though. It seems the growth of Targeted TV Advertising is fundamentally shifting consumer perceptions on ads and ad loads.

“The survey suggested that the assumed view of people not liking ads was a throwback to linear TV,” writes Rapid TV News. “Ads on streaming platforms were seen as a different proposition with lower ad loads, fewer breaks, potentially offering more ads for products that were more relevant to the viewer. Viewers who watched ad-supported shows on streaming platforms were much more likely to say the ad load was “reasonable” and are also more likely to say they enjoyed the show they watched.”

While advertising may not be in decline, the percentage of people that still watch linear TV very much is.

Omdia’s latest Cross-Platform Television Viewing Time Report – 2022 reveals that overall the average total daily viewing time of television declined to 362 minutes per person per day in 2021 (6 hours and 2 minutes) in nine key markets, down 2 minutes on the previous year.

Declines in linear TV, online short form, and pay TV VoD account for this drop in viewing, with linear TV seeing the sharpest falls and declining across all surveyed markets. Omdia is keeping the exact figures behind its paywall, but you can get a sense of them from the following table. 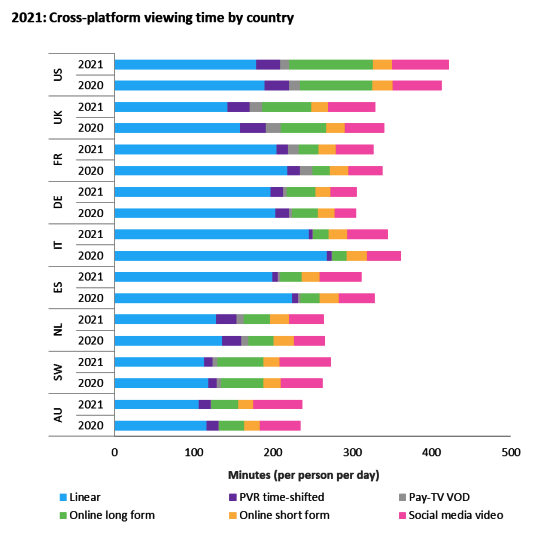 It is perhaps worth noting that, in terms of popularity, linear TV still remains by some distance the most favoured way to watch TV in all the markets covered. But the balance is shifting, and Omdia reckons that 2022 will be the year that the non-linear platforms combined outperform linear for the first time in the most developed markets such as the US and UK

So, why only a two-minute overall drop? These declines were counterbalanced by growth in online long form and social media video viewing. Online long form (ie TV) was a key area of growth across all markets, edging up by 8 minutes, reaching a daily 68 minutes in total. Time spent viewing video content on social media platforms, meanwhile, increased by 9 minutes in 2021 to an average of 60 minutes per person per day.

The clear winner is TikTok. The platform was the standout performer for video growth during the year, and is now set to overtake Facebook in total time spent for the first-time.

Amazon has overhauled its offering in three key Southeast Asian markets, Indonesia, Thailand and The Philippines. While we tend to think of the online retailer as being globally ubiquitous, the Amazon Prime shopping membership scheme, to which Prime Video is attached in developed markets, has not been available in these three countries. So now they get their own, stand-alone, localized Prime Video service.

The new service will be offered as a seven-day free trial, followed by discounted introductory offers of IDR59,000 ($3.98), THB149 ($4.10) and PHP149 PHP ($2.69) per month valid till the end of the year. And Amazon is backing that up with localized content slates featuring several originals developed in the new markets, as well as over-hauling the user experience to provide subtitles and local-language user interfaces.

Given the recent growth and success for operators in APAC, as well as the size of the populations involved, especially when you factor in diasporas,  it's a move that makes perfect sense.

Why the SVA is now the SVTA

Jason Thibeault is the Executive Director of the organisation and has written an at times heartfelt blog post about the change, calling it less of a rebrand and more of a clarification.

“Although all of the work done by the Alliance focuses on addressing specific technical challenges, I continued to get asked about business models and revenue opportunities. This made us realize that our message was still not precise enough, and that we needed to do something different to communicate our intention to focus solely on technical issues.”

The STVA has already done a lot of important work for the streaming industry, and with Thibeault saying that the change will give its working groups “a new gravitas” there will be a lot more to come.